Asking the Right Questions: Thinking Critically on the Fly

With vast amounts of information at your fingertips online, getting the facts right should be an easy task, right? Al Tompkins, senior faculty for broadcast and online at Poynter Institute, doesn’t think so.

To make his point, Tompkins gave a room full of journalists the unique privilege to “shoot the bird” for 1.5 seconds during a professional conference, testing previous headlines about a basketball player who allegedly flipped the bird during a game. In a newsroom setting, however, journalists don’t have the luxury of time to check the photo by reviewing the tapes or test theories.

“Very often you get lured into the argu 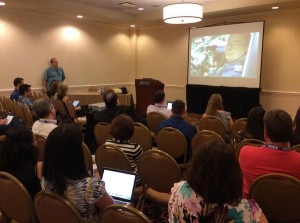 “Do we or don’t we — yes or no? What I’d like to do now is push into a higher conversation. What do we know? What do we need to know? How do we know it and is there any other way to look at that?”

Besides, is a few seconds of the bird really that big of a deal, intentional or not? Tompkins pulled up photos of George W. Bush and Obama and a video Mr. Rogers flipping the bird – intentionally or not – to make his point. Without context, viewers really don’t know what they’re looking at.

“What do we think we know?” he said, again emphasizing the questions to ask when trying to establish accuracy and context.

Mentioning audio and video from the Ferguson shootings, Tompkins dismisses opinion and goes straight to fact, which in cases of breaking news, reporters don’t always have.

“Why not wait for the facts?” said an audience member from the crowd.

In Tompkin’s point of view, the “sit and wait” ideal isn’t representative of the world journalists live in today.

“Tell readers what you know, what you don’t know and how you know it,” he said. “Transparency is key.”

In between audience laughter and witty banter, the conversation had its serious points, encouraging the crowd to dig deeper, ask questions and think critically.

After watching a user-generated video of a plane in midair lose its right wing but still land safely on the ground, the group debates on whether to put it up online.

“Show the video to a pilot or an aviation expert and ask them if it’s even possible,” said an audience member.

Previous story
15 Career Tips on the Go
Next story
Roundup: Honoring a Lifetime of Excellence in Journalism
The SPJ News