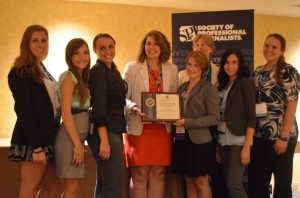 Though it’s no longer a swanky luncheon to celebrate the Society of Professional Journalist’s student awards, the conference still puts on a show for its younger participants.

The annual student union handed out five individual awards recognizing the campus chapter of the year, campus advisers, students, teachers and graduates. It also included the annual Mark of Excellence Awards on the national level after reviewing winning entries on the regional levels evaluating work from print, broadcast and online. This year featured more than 5,000 entries, setting a record for the award competition and its 12 regions. Soon, the awards will also include “best of show” an overall winner representing the best body of work. The event was hosted Andrew Seaman, a journalist at Reuters. 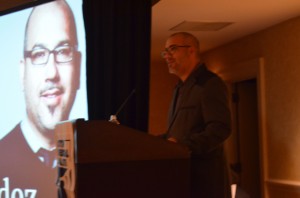 The event featured Victor Hernandez, news futurist at CNN and a member of SPJ, ONA and NAHJ, offering his advice for the young journalists.

“One piece of advice I would share at this point of your career is very simple: aim higher,” he said. 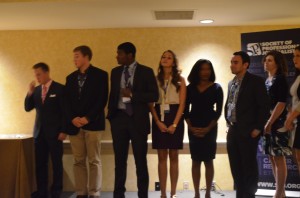 For a complete list of Mark of Excellence Awards visit spj.org