From rocking out Helen Reddy’s “I am Woman” to crooning the sensual Black Eyed Peas’ “My Humps” a la the folksy 70s, the First Amendment was exercised with a melody on Thursday night.

Freedom Sings, a program of musicians, perform songs that were once censored by the government for provocative lyrics. The group is the brainchild of Ken Paulson, president of the First Amendment Center, who created Freedom Sings to draw youth to the density of the freedom of speech from censorship.

Fittingly following John Seigenthaler’s tribute and housed right in Music City, the performance spanned decades of modern music, beginning with civil psychedelic hits from the 1960s like the Beatles’ “With A Little Help from My Friends” to Ice-T’s controversial “Cop Killer.

Paulson joked that Ice-T has since retired from rapping and now stars on TV’s “Law & Order.”

“Is this a great country or what?” Paulson joked.

The set continued on with Bob Dylan’s classic “Blowing in the Wind” and a soulful solo performance of Sam Cooke’s “A Change Is Gonna Come.”

But while the Freedom Sings program was intended to draw in young folks, music fans of all ages danced and sung along to the hits.

“Every civil justice movement has music attached to it,” said Kathryn Mobley, a senior producer at WFDD, the NPR affiliate at Wake Forest University. “It’s a wonderful presentation of a history lesson.”

Freedom Sings has toured across the country, primarily at college campuses, exposing students to censorship throughout societal changes for 15 years. The band members have their own favorites.

“‘Blowin in the Wind’, that one never gets old,” said guitarist Bill Lloyd.

Vocalist Jonell Mosser said “Ohio,” written one day after the Kent State riots by Neil Young, often resonates the most with journalists because of the similarities of reporting the truth.

“Neil was a troubadour, a town crier,” she said. “To me, of the many of the stories told, that’s the most important.” 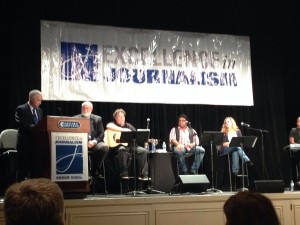 Previous story
Roundup: Honoring a Lifetime of Excellence in Journalism
Next story
Pushing For Parity | An Infographic About Women In The Newsroom
The SPJ News