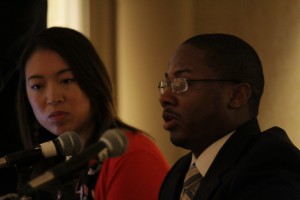 While the crisis in Ferguson raged on in front of camera crews for weeks on end, reporters on the ground saw a different reality.

They also saw that reality distorted – or participated in the distortion themselves – as Ferguson descended into a “war zone” in a matter of days. The protests and the violence were mostly limited to a three street block area and most of the incidents happened after nightfall, more specifically, after midnight.

Speakers at Friday morning’s Ferguson panel were on the scene as the police brutality and subsequent protests unfolded after a police officer shot and killed Michael Brown, 18, an unarmed black resident of St. Louis’ Ferguson community.

Bob Priddy, past chairman of the board of RTDNA, led the meeting as the moderator.

NPR’s Elise Hu arrived in Ferguson shortly after the protesting began and says that, despite the existence of brutality, the violence was not as widespread as it was portrayed by the majority of news outlets.

Complicating the coverage, Hu said some protesters acted out to gain media attention, which gave viewers an unrealistic view of what Ferguson was really like.

Both Hu and fellow speaker, Robert Brooks of New York’s Radio One, who assembled a team to cover Ferguson, say reporting was difficult. Media had to deal with police brutality while striving to keep coverage fair and accurate.

Both Hu, who is originally from St. Louis, and Brooks realized the importance of the coverage in Ferguson. They were both subject to the confusion that descended upon Ferguson in the heat of protests.

Hu was often caught up in the crowd and even was trapped inside a van that was approached by a tactical unit.

“It was chaotic and the police were operating from a defensive position,” Hu said. “It was impossible for them to tell who was who.”

Brooks said one of the most difficult parts was verifying information and news tips as they happened. Many residents who spoke out about a police incident would later refuse to talk again out of fear.

One of the most important strategies Brooks used was to assign reporters who were familiar with the St. Louis area.

“If you’re not from St. Louis, you were going to have challenges,” Brooks said. “We needed locals who had experience and were able to get access.”

There were also more practical lessons, according to Hu.

“With any situation like this, you don’t want to wear yourself down too early,” Hu said. “Journalists who are covering something with no fine end need to remember to not go 24 hours a day.”

“Our responsibility is to report the facts and come from an unbiased perspective.” – Brooks on covering the #FergusonShooting #EIJ14

Keeping the point of the story in mind and not just the hype was also key.

“There are a lot of social issues and ethical issues being raised, but staying true to the story is important,” Hu said. “You need to keep bringing yourself back to what your responsibilities are to the story you’re covering.”

Ashley Higgenbotham, a conference attendee who lives five miles outside of Ferguson, said Hu and Brooks made valid points about media coverage.

For law enforcement, lessons learned from Ferguson are clearer, especially as awareness about the militarization of police is at an all-time high.

Concerning to Hu and Brooks, as well as fellow panelist Gregg Leslie, the legal defense director of the Reporters Committee for Freedom of the Press, is the failure of police to respect First Amendment rights.

“Police used to respect the press badge. You could go behind police lines. You can’t do that anymore,” Leslie said. “It doesn’t matter if you’re a reporter for the New York Times or the Washington Post. You don’t have those rights.”

Law enforcement also waited too long to disseminate important information, including waiting almost a week after Brown was shot on Aug. 9 to reveal the name of the police officer.

“No matter what your opinion is on what happened, it’s most important that information gets out to the public,” Gregg said.

Journalists also have a responsibility, especially when it comes to keeping the story balanced and representing the community fairly.

“Journalists, as often as we can, should widen our lens and see more and try to explain more,” Hu said. “We need to keep our audience in mind – what do they need to know, what are their needs and how can we meet them.”