Roundup: Honoring a Lifetime of Excellence in Journalism 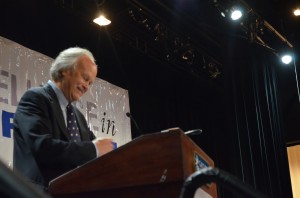 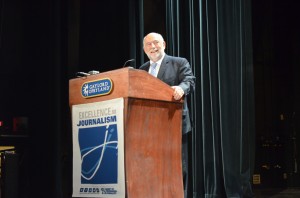 From ESPN to NBC to SNL, two creative forces behind some of the nation’s most-watched programming were recognized Friday for their achievements in journalism.

Harvey Nagler, longtime Vice President for CBS Radio News, received the John F. Hogan Distinguished Service Award, which recognizes an individual for contributions to the journalism profession and freedom of the press.

Ebersol is a senior advisor for NBC’s Universal Sports & Olympics and was one of the brains behind Saturday Night Live. During his speech, he discussed the stories behind his prolific projects, including the process of developing SNL and the prolific relationships he built along the way.

Nagler’s speech focused on different issues in journalism, such as a continuing dedication to preserving freedom of the press. He also discussed education issues, addressing the students and the teachers in the room.

“In this digital age, our schools are incubators as innovation,” Nagler said.

He warned, however, against leaving behind a focus on strong reporting.

Here’s a round-up of the awards, compiled by Colleen Wright:

Have anything to say about the award winners? Leave it in the comments below or tweet us a comment @EIJ_News.