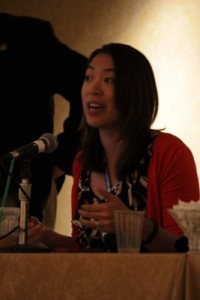 NPR’s Elise Hu discusses her experiences covering recent events in Ferguson, Mo. during a panel at this year’s Excellence in Journalism convention at the Gaylord Opryland Resort and Convention Center. Photo by: Julian Paredes

“How many of us have covered crime scenes and had to duck under crime scene tape to get better footage? That does happen,” said one EIJ panel attendee, directing her comment to Hu and fellow panelists Bob Priddy, Missourinet news director (based in Jefferson City), and Robert Brooks with Radio One, which operates in St. Louis and Dallas.

Besides law enforcement barriers in Ferguson, journalists also had to face, well, themselves.

An Al Jazeera journalist came to Ferguson the night after rapper Nelly showed up at the protests, Hu said. This journalist wrote that he wasn’t going to return to the city because he observed journalists making their event coverage about themselves, she added.

“There probably is no question that there were a few bad actors among the journalists,” said Hu. “By the time I left, and I asked to leave because it was such, you know, it’s like dog days being in Ferguson, you know, one day was like seven days.”

By the time Hu departed Ferguson, two weeks after Michael Brown, an unarmed black teen, was fatally shot by a white police officer nearly a month ago, there were many international media outlets there.

Members of some of these outlets wore gas masks, she said, almost hoping that something would go wrong and “perhaps portray ‘this is what’s happening on the streets of America.”

There was no question that toward the end of the “big cycle” there were “opportunistic journalists,” but still relatively few, Hu said.

I spoke with Hu about her coverage of the riots in Ferguson as a female journalist.

Q: The process with NPR, did they have any hesitations sending a female journalist over (to Ferguson)?

A: No. In fact, I wasn’t the only female journalist on the ground. My colleague Shereen Marisol Meraji, she is a race, identity and culture reporter based out of L.A. She flew in as well to be on the ground, and so I didn’t feel any sort of difference in treatment by my news organization or by police or protestors that we encountered. So, there wasn’t any sort of sexism that I saw, which is good.

Q: Did you notice that, were there quite a few female journalists in Ferguson?

A: Ya. One thing, and we kind of have a sense of solidarity or sisterhood, right, too, so the night that I went down past the barriers and out of the media staging area and things got really dangerous, I actually went with a buddy, and that buddy was another female journalist, who was shooting, a photographer for The New York Times, and she said, “You know, well, there’s, because it’s a dangerous situation we should really go together,” so it was us two ladies encountering the police (when I played that barricade tape) and then us kind of going in the back way and then coming into a place that didn’t really feel like it had a lot of cover. And so she actually, having that buddy there who had been in the situation night-after-night, because I hadn’t been there on the ground in the parameter as many nights as she was, she was really helpful as a guide. And she said, “You know, I feel too exposed here, we need to get into a place with more cover.” She had some other photographer friends who said, you know; get on this side of the street, not that side of the street, and so really kind of having a band or a buddy system really helped. My news organization was wary about us getting too close from the very beginning, and in fact they didn’t even recommend that we get into the mix of it all and get into the really particularly chaotic parameter. That night it was unclear who was supposed to be where because we didn’t have any member station reporters who were on the ground and there weren’t any NPR reporters besides me that were in the area because they were filing for the next morning, and so I was the only one there, but for having other journalists from other news organizations to team up with I would have been totally on my own. So, it was really helpful to kind of pair up.

Q: What kind of training is involved? Do they just kind of send you out there?

A: No. The funniest situation is we have 17 foreign bureaus around the world and so there’s a lot of experienced correspondents. NPR offers something called Hostile Environment Training and it’s a three-or-four day camp, if you will, with an ex-British military guy who runs through all sorts of different situations that you might run into. For example, coming up to military barricades or if you are detained and questioned and how you’re supposed to respond to that. So, Hostile Environment Training is offered, especially to the correspondents that are overseas or likely to be in conflict zones. What was so funny is that I had Hostile Environment Training for me scheduled a week after I was in a hostile environment. So, I still haven’t been. … I’m still gonna do it, eventually, but now I have a little on-the-ground experience of a pretty chaotic situation.