The Origins of "Excellence in Journalism" 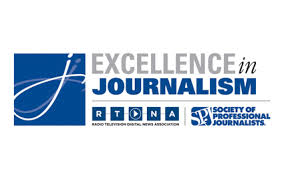 But where did “Excellence in Journalism” come from?

For years prior to the first Excellence in Journalism conference, the Society of Professional Journalists (SPJ) held an annual conference for its’ members. In 2010 the organization combined forces with the Radio Television Digital News Association (RTDNA) to hold a joint conference annually beginning in 2011.

“The idea was that it would be an umbrella conference, so eventually other groups would come in like NAHJ has. Next year the Native American Journalists Association is joining us” said SPJ Director of Education Scott Leadingham.

In order to find a brand that could be used for every conference, not just 2011, a contest was held and the name “Excellence in Journalism” was born. The National Association of Hispanic Journalists joined the conference in 2013, and return once again this year in Orlando.

“Groups can come and go as they need depending on the location and their needs,” said Leadingham.

Previous story
A guide to the professional headshot; Expo booth offers free photos
Next story
Top 8 ways to eliminate mistakes in your copy
The SPJ News