For SPJ Director of Education Scott Leadingham, planning a conference is all about drawing from past experience.

“You kind of learn year after year about what works and what doesn’t, and what’s popular and what’s not,” he said. “When we schedule rooms, we look at what will probably be more popular, so we can schedule for bigger rooms. It’s guesswork. Sometimes it’s not as popular as we think, and sometimes it’s more.” 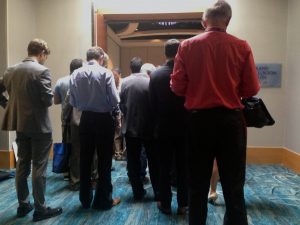 Attendees stand outside the crowded “News Content: What Works?” session.

At the afternoon “News Content: What Works?” session, it was standing room only, and some attendees were left on the outside looking in. As such, organizers suggest arriving to popular events as early as possible to ensure a spot in the audience.

“[Predicting the popular events] is always kind of hard to gauge, because with different groups, things are important to different people,” he said. “For NAHJ, for example, there will be a few sessions that are really big for that audience, but not for SPJ or other reporters.”

But that doesn’t stop the leadership from trying to predict popularity based on the timeliness of the topic—such as the Saturday supersession, “WDBJ Shooting: A Tragedy Unfolds In Real Time.”

“Another one, happening [Saturday] at 11 a.m. is the ‘Rape on Campus’ session, that involved the controversial Rolling Stone article,” Leadingham said. “This review will be done by Steve Coll of Columbia University. He’s going to be here to talk about breaking down the ethics of everything that happened with Rolling Stone. We assume that’s going to be a bigger topic.”

According to Leadingham, breakout sessions were shuffled to give more people the opportunity to attend. “‘A Rape on Campus’: Ethics, an Autopsy and Aftermath” is expected to be a popular session, as well as “Covering Ferguson and Baltimore.”

“It’s similar to one we did last year,” he said of the latter session. “It was a packed room. Granted, it just covered Ferguson last year. Now with Baltimore and the race relations issues that have popped up in the last year [and the issue of] journalists’ rights, that’s one session we think will be a good draw.”

“For example, there’s this Sunday session about Google tools—free tools for journalists,” Leadingham said. “It’ll probably be pretty popular. It’s like catnip for journalists. Anything with the word ‘digital’ in the title, people will run to.”

But even popular topics tend to change over time, he said. A ‘Facebook for Journalist’ session would not have the same draw today as it would five years ago.