Stereotypes and skin color: navigating ethnicity as a latino journalist 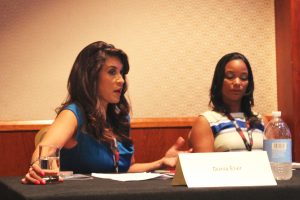 Dunia Elvir speaks at the panel discussion on ethnicity and race in Latino-American journalism.

When Denise Isaac, a Panama-born meteorologist for Miami’s Telemundo 51, moved to the United States for college, she faced an unexpected challenge mingling with her new peers.

“When I first got here, people just automatically thought I was a black African-American,” Isaac said as a panelist during an #EIJ15 Saturday session, Off-Color: Navigating Race and Ethnicity as a Latino Journalist.

Isaac said she didn’t fit the stereotypes her young colleagues had about her skin color. “I’m not the black you think I am,” she added.

“When people talk about Latinos or Hispanics, they incorrectly, oftentimes, talk about them as a race,” said Hugo Balta, senior director of multicultural content at ESPN and moderator of the panel discussion.

Citing information from the 2010 U.S. Census, the panelists pointed out the majority of Latino-Americans described themselves as ‘white’ before any other color.

“It’s certainly not a race,” said Balta, referring to the Latino-American community.

Saturday’s breakout session sparked discussion on the misperception of race and ethnicity within American news culture, focusing on television journalists with a diverse ancestral background.

“At the baseline, it’s a non-conversation,” said Claritza Jiménez, a producer at Associated Press Television News and panelist for the discussion. “The main issue is that we don’t even talk about it. This conversation is long overdue.” 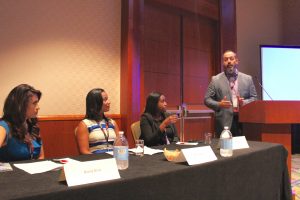 Jiménez, a self-identified Dominican-American, relayed some of her struggles on being a black Latina woman in the journalism job market. “The Latino identity is different here than in Latin America,” Jiménez said. “It still blows my mind that when people meet me, they’re surprised.”

One of just a handful of Honduran-American news anchors in the United States, Dunia Elvir, an anchor for Telemundo, described her own personal struggles on assimilating to American culture. “I stopped going out in the sun,” said Elvir, another panelist at the discussion. “We start to change who we are, to start fitting into the box that was given to us. We don’t speak up.”

Isaac championed Elvir’s response. “In Latin America, they don’t treat race the same way that we do here,” Isaac said. “Let’s be who we are. Let’s just embrace race and accept who we are.” Elvir also spoke on the challenging responsibilities of being a minority voice in a newsroom. “We are the ones directing the boat,” Elvir said. “We’re being that voice that they trust.”

Digital platforms such as Twitter and Facebook have significantly improved access for mainstream media into important ethnic communities and issues for potential news coverage. “These conversations are happening whether we are doing the stories or not,” Jiménez said. “If you pay attention to social media as a journalist, these stories are going to fall into your lap.” 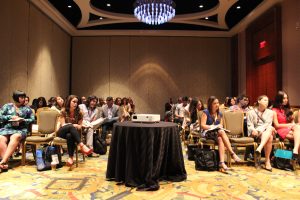 #EIJ15 attendees at the ethnicity panel.

However it may not be as simple as tapping into where these conversations occur, but also how the message is being communicated. “As journalists, we need to step back and look at context,” Jiménez said. “Language has power. You have to hold people accountable.”

Consciousness for these issues, and others, is key for journalists within these ethnic communities, as well.

“If we learn to respect each other, we won’t be talking bad about each other,” Isaac said.