Drones for news slowly taking to the skies 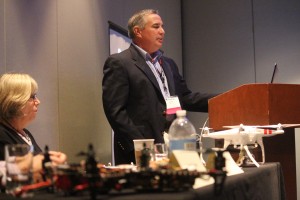 Journalists are often looking for any advantage for discovering, gathering, and reporting news events reliably and quickly. Especially if that includes eyes in the sky.

However even after ongoing examination and exploration of proposed regulations for operating drones in the U.S., news organizations largely remain in a holding pattern for legally launching drones from station helicopter pads.

With recent use case examples for just how unmanned aerial vehicles (UAV) can provide a difference with newsgathering and reporting, many questions still exist about the legalities and restrictions for commercial use by media companies including news organizations.

“The law is always trying to catch up to technology, the problem is technology moves at an exponential rate,” Mickey Osterreicher, general counsel, National Press Photographers Association.

Many news organizations turn to hobbyists for drone footage– but there are guidelines. The organization seeking video cannot have a professional relationship with the hobbyist, and a request of any drone footage is prohibited.

RTDNA’s Kathleen Kirby says that Section 333 of the FAA Modernization and Reform Act allows exceptions to the law, allowing for the government to grant some exemptions. So far, more than 1,50o of these exemptions have been granted.

More on drones from Soaring Sky from Shelby Reynolds on Vimeo.

Kirby advised that newsrooms should explore the Section 333 waiver and implement an internal plan for waiver exemptions. “It’s the first step to law proposal,” she said.

Penalties for illegal drone use range from $5,000-$25,000. There are six test sites in the nation that allow drone experimentation. Virginia Polytechnic University is one of them, allowing news organization to operate drones for testing purposes.

We already have innovation, but as journalists we’re going to have to bring broader views to governments so they can see how beneficial drone use can be. Privacy shouldn’t be an issue because digital media is already here,” Janet Zaragoza, California State University, Fresno.

Some drone industry experts believe we may not see any major changes to government regulations until late 2016 or early 2017.