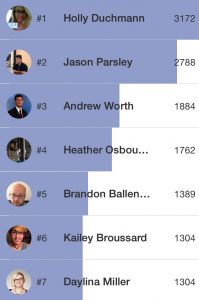 App scores as of 5 p.m. Sunday – seven hours before the competition’s end.

Holly Duchmann and Kailey Broussard are not only fellow student journalists at the University of Louisiana at Lafayette, but even closer this weekend during Excellence in Journalism 2015 while rooming together in Orlando. However this weekend their friendship took a competitive turn.

An online competition integrated within the popular EIJ15 mobile app has seemingly formed rivalries and friendships among conference participants. The app awards points for things such as posting photos, checking in at events and participating in online surveys. The overall winner scores free registration to next year’s EIJ conference in New Orleans.

While battling their way to social media glory, Duchmann and Broussard say they’ve found a rewarding experience in what started as lighthearted competition. “It strongly motivates people to communicate,” Broussard said. “I just ran up to

people and they recognized me from the app.”

Andrew Worth, a mass communications and journalism senior at California State University, Fresno, has consistently hung around the top of the app leaderboard all weekend. “It’s just another way to network,” he said.

However, not all content being posted is being received with the same enthusiasm, Duchmann suggested users could easily game the app competition with posts irrelevant of the conference.

Tara Puckey, SPJ member strategist, said the app is designed to engage users by helping them network and discuss the conference. “We’re a journalism organization, so we can’t dictate what people post and what they talk about,” she said. “We just hope that it’s used mainly as a tool to enhance their conference experience.”

SPJ Region Three Director Michael Koretzky said certain users are ruining the experience for others while sabotaging their own chance of successfully networking – all for a conference admission. He counted 189 posts over one hour from a single user.

“People just kind of backed away like you back away from a person who’s talking to themselves at the park,” he said.

Instead of awarding points for each post, users should have the option to vote on worthwhile submissions, Koretzky said.

He plans to make recommendations during a board meeting on Monday.

Previous story
Drones for news slowly taking to the skies
Next story
Storify: The art of storytelling: by Boyd Huppert
The SPJ News