FERPA and personnel and open investigations, oh my.

Public entities will sometimes try to claim that open records are not available because of FERPA, personnel or an on-going investigation.

FERPA is the Family Education Rights and Privacy Act and was signed into law in 1974.

When FERPA was enacted, it wasn’t created with the intent to keep information out of the hands of journalists. It was created to make sure the FBI and CIA didn’t make assumptions about students’ psychological profiles to keep them under surveillance for being a potential serial killer, LaMonte said.

LaMonte talked about a story where The Oklahoma Daily, the student newspaper of the University of Oklahoma, was trying to get the open records of parking citations that were issued to athletes at the school, but the school denied its request, claiming that the records were protected by FERPA. The paper then filed a complaint that the university was not FERPA-compliant because there were parking citations on cars that were face-up, therefore “exposing” a student’s protected information.

Needless to say, The Oklahoma Daily soon received its open records request because, in fact, those citations were not protected by FERPA.

“FERPA is one excuse you should always look at skeptically,” LaMonte said.

“So many people in and outside of government have been conditioned to accept – to just say the word personnel – and somehow it’s a get-out-of-FOIA-free card,” LaMonte said. “That is a great over-statement of the law.”

LaMonte spoke about an instance in California where a school principal was fired, and the superintendent publicly commented that the principal was an ineffective manager and the school district had to make a change.

The principal sued the superintendent for giving out his personnel information.

The court threw out the case because it was frivolous and then made the principal pay the superintendent’s attorney’s fees.

When a football team makes a decision about a coach, the public certainly hears about that, LaMonte said.

Almost all exceptions to open records laws are discretionary, LaMonte said, meaning the individual agencies can decide whether to invoke it.

Just because an investigation is ongoing, does not mean that the records can be withheld from the public.

If there is a record that is going to divulge confidential information about an investigation, such as a sting operation, surveillance tapes or confidential informants, that could be a reason that a police report might not be an open record, LaMonte said. However, interference with an investigation is the only reason the information shouldn’t be released.

Many people don’t realize that the document a police officer completes after a crime happens is public. LaMonte said to remember that when filing requests. 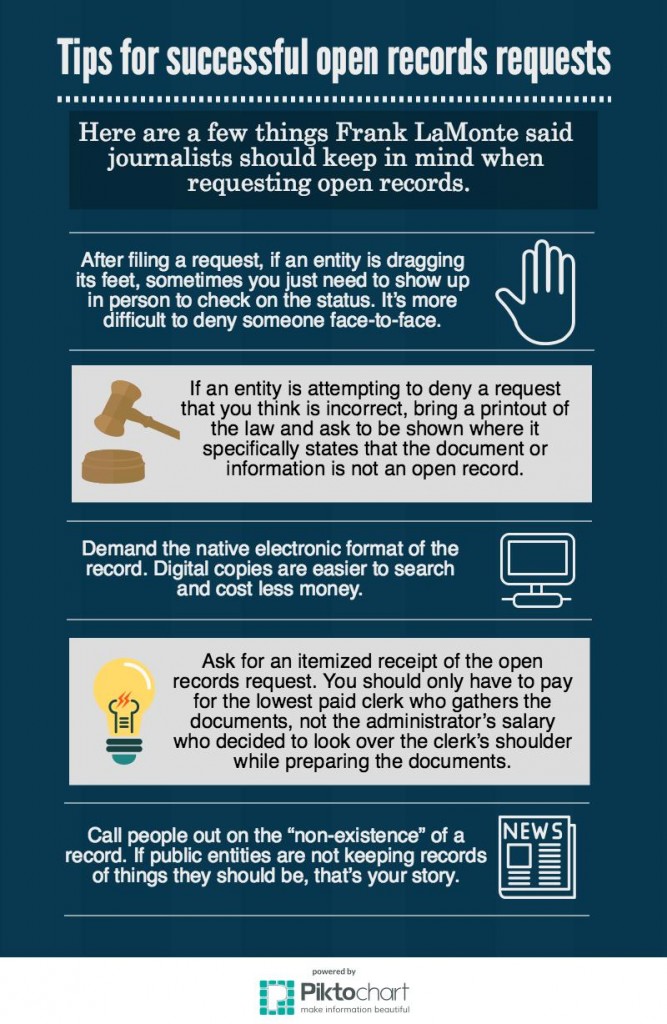