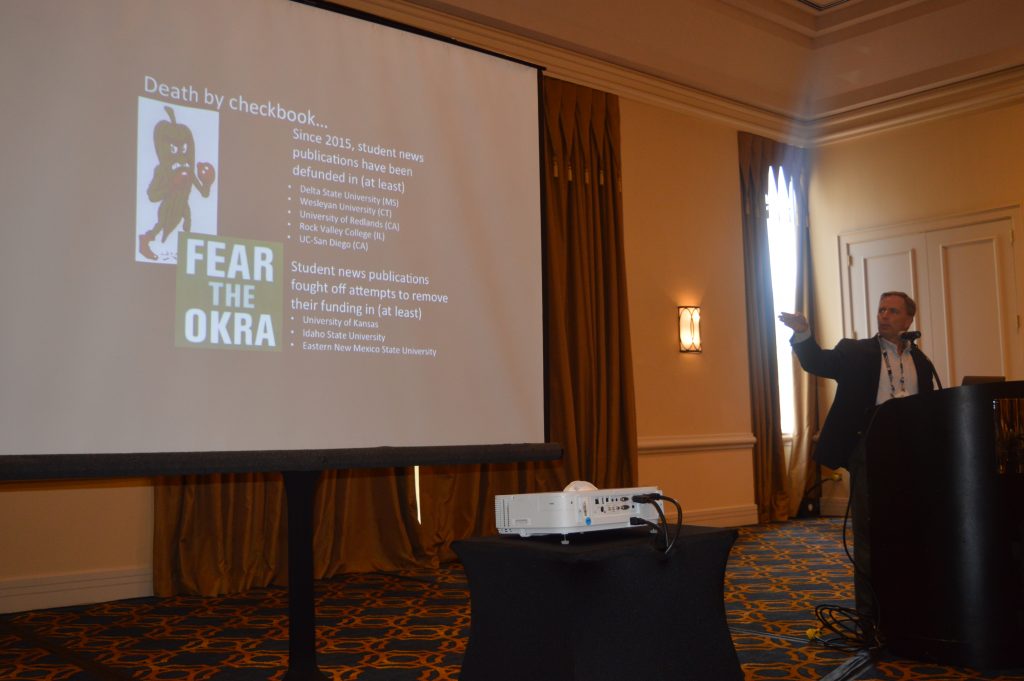 “If you ask college journalists today what the biggest problem they’re facing is, most of them won’t tell you it’s direct institutional censorship, but what I’ve started calling censorship by starvation,” LoMonte said. “That is, we’re going to cut off all access to all the records, all the meetings, all the people on campus who have any meaningful information.”

Guest speaker Jacob Buckland, senior at Fairmont State University and former editor-in-chief of the school’s paper The Columns, covered toxic mold in the school’s dorm that was a health concern to students. The administration informed him that he would not be allowed to publish, but he did anyway.

At the end of the year the university told the paper’s advisor Michael Kelly that he would not be returning as a professor or advisor. The school hired three new advisors, who Buckland said did not have journalism experience.

Upset about the school’s lack of communication, Buckland sat down in a meeting with the university president and the provost, and the paper ended up dissolved.

“They said, ‘you’re supposed to report things that make the university look good,’” Buckland said. “‘We’ve been shown in a very negative light in the past two years, and that’s your fault. We’d like for you guys to stay on but only if you run the PR kind of stories.’ I said, ‘I’m not interested in that.’”

Loni McKown, former professional practice faculty and advisor at Butler University’s school of journalism, faced the same adversity as an adviser. After years of her students’ writing hard hitting investigative pieces, she was terminated as advisor. She was told last May her university would not be renewing her contract. She is currently the only professional practice faculty member at the university.

“This is all about marketing. This is all about branding, and God forbid anybody should mess with Butler University and the Butler name,” McKown said. “The students who were very transparent in their reporting were told, ‘do not write this story. Do not publish this story. You’re going to bite the hand that feeds you.’ Needless to say they published the story.”

LoMonte stressed the processes in which universities choose presidents that are damaging to student journalists. He cited presidents such as Washington State University President Kirk Schulz, who LoMonte said was chosen during an illegal meeting of the board of trustees. LoMonte also pointed to the University of Georgia President, who was selected in a complete closed door process and then revealed to the public as, ‘the finalist.’ LoMonte says that affects transparency in student media as well.

“This is increasingly the way presidents are chosen,” LoMonte said. “This favors inside candidates, politically connected candidates and candidates who have scandal in their background that can’t survive public scrutiny.”

LoMonte says this method of selection is becoming a trend and reason for concern. “They’ve literally stolen their presidencies, and when you pick a president in that kind of secret environment, what kind of president do you get? A president that believes secrecy works because secrecy worked for them. A president that believes that laws should only be obeyed when they’re convenient to them and that disclosure laws can be violated without consequence.”

Conference attendee and Samford University student Olivia Williams identified with the issues discussed in the session as a journalist at a private university.

“We have a real transparency issue and kind of struggle with the same things they were discussing here, trying to get through the administration especially because we’re a private university it’s hard to put out information that we think is valuable to students,” Williams said.