FAA clarifies use of drones for newsgathering

Newsgathering drones can only be used if the operator is certified, and the device is properly registered through the FAA, said Mickey Osterreicher, general counsel for the National Press Photographers Association. 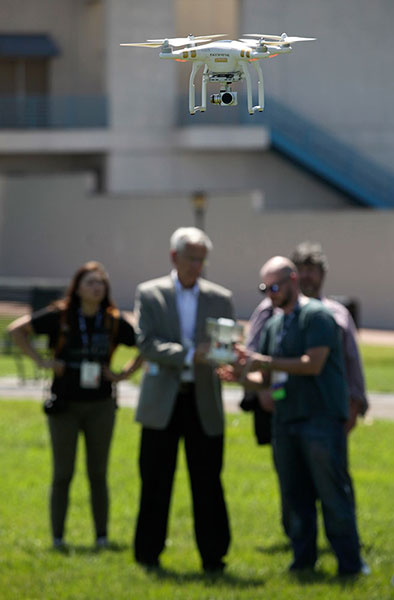 The certification process started on Aug. 29, and requires operators to pass the FAA’s part 107 exam, which tests their knowledge on drone regulations, airspace requirements, weather and operations.

Mary Blue, a professor at Tulane University, took the exam on Sept. 2 and became the 20th drone operator to be certified in Louisiana. The training course cost her more than $6,000, plus $150 for the part 107 exam and $5 for drone registration.

“The test is very difficult,” she said. “They had several scenarios that asked what to do if a television station hires you. It’s funny that a scenario included a crazy person at a TV station.”

“The last thing we need is some nitwit ruining it for us, whether it’s an operator or some news director that doesn’t care about the rules,” he said. “The FAA has been granting waivers to allow flexibility, and we want to keep it that way.”

Andrew Seaman, chair of the Society of Professional Journalists Ethics Committee, said newsrooms should carefully decide when to use drones to avoid ethical dilemmas and FAA penalties.

“If you’re going to show drone video, you need to really put it in context,” Seaman said. “Just because you have a piece of video, doesn’t mean you should air it.”

CNN recently became the first news organization to receive an FAA waiver, allowing the company to fly drones over people in the U.S.

“The ability to fly over people is a huge step forward, and a necessary one as we cover the news where it happens,” said David Vigilante, CNN’s senior vice president of legal. CNN has used drones to cover Louisiana flooding and the Flint water crisis, according a company news release.

Meanwhile, as media companies experiment with drones, the FAA’s Drone Advisory Committee met for the first time in Washington D.C. Friday to offer drone usage recommendations to the FAA.

Osterreicher attended the meeting and said although drone rules are now clearer, there are still grey areas due to state and local attempts to regulate drones.

“Local governments assume the FAA only controls airspace from 400 feet and up, but that’s not true,” he said.

The National League of Cities recently recommended that local municipalities enact local safety and privacy laws to limit drone use. Osterreicher said a privacy argument can be easily challenged in court.

“In the United States there is no reasonable expectation of privacy in a public place,” he said. “But it’s a whole lot easier to ask the Governor to veto a bill versus mounting a constitutional challenge that will go through courts.”

Osterreicher said NPPA is working to educate state governments on the value of drone newsgathering, and the visual advantages to storytelling.

“Whenever there’s an earthquake, a flood, a forest fire, the first thing that happens is a president or leaders takes to the air to assess the damage,” he said. “You can really get a perspective from the air.”