The Society of Professional Journalists honored Jeff South as the recipient of the Distinguished Teaching in Journalism Award as an outstanding journalism educator who has made an exceptional contribution to the profession and/or journalism education. According to the SPJ, South won this year with passionate letters of support from faculty of the Robertson School of Media and Culture.

“I’m awed, humbled and looking at how many great teachers there are out there and previous recipients of this award whom I have shamelessly stolen teaching ideas from and tried to emulate,” South said. “I’m thrilled of being included in that echelon of teachers but at the same time I know I stand on the shoulder of lots of other people.” 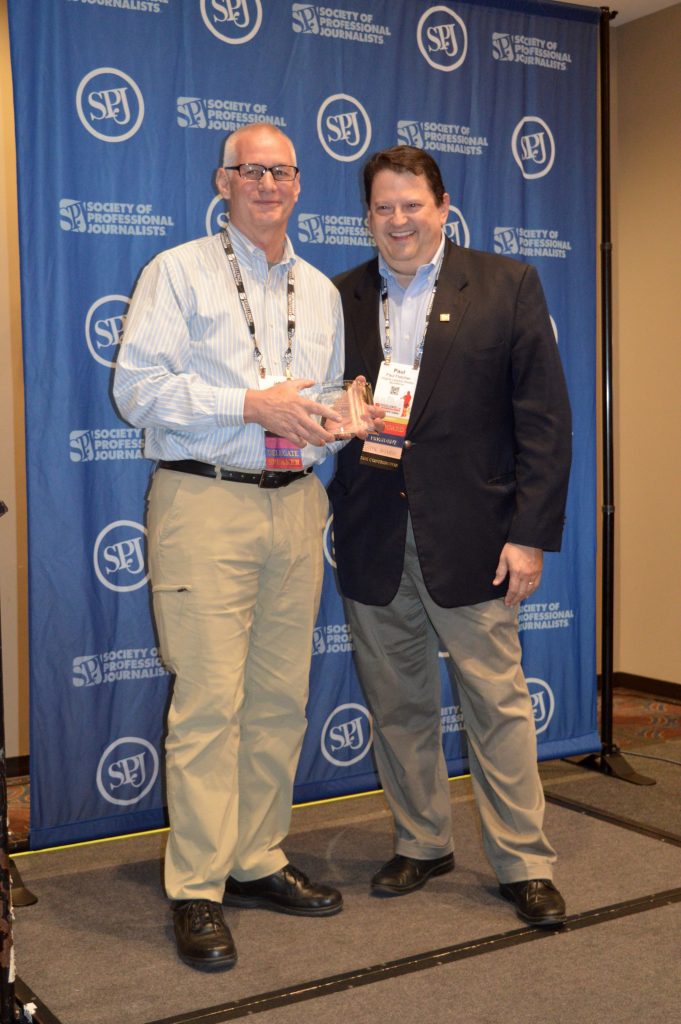 Associate Professor and Director of Undergraduate Studies at Virginia Commonwealth University was awarded the Society of Professional Journalist Distinguished Teaching in Journalism Award last night. He was awarded at this year’s Excellence in Journalism conference held in New Orleans.

“His enthusiasm for storytelling is genuine and unending. Jeff ensures that Robertson School graduates leave armed with the clips, skills and experience to step into professional reporting jobs,” Kane said. “We’re over the moon to have a hometown educator receive this national honor. Jeff has been a stalwart member, serving several terms as an officer in our chapter. He’s always made his time, energy and knowledge available and pressed us to always keep student and young professional members in mind.”

Associate Professor and Director of Undergraduate Studies at Virginia Commonwealth University, South graduated from the University of Texas and worked as a reporter for several papers in the following ten years in Texas, Arizona, and Virginia. To broaden his landscape and distance himself from the journalism world, South decided to join the Peace Corps where he taught english in Morocco.

“When you’ve been a journalist for a while there can be a tendency to see everything as a story. If it’s not a story you start tuning out and I didn’t like being that way,” South said. “It was a good place to recharge my batteries as a person and as a journalist.”

From paperboy to reporter South had always been interested in the news and telling stories.

“I was interested in telling stories and being the first to tell somebody something new in some ways it was easy- I both enjoyed it and had a knack for putting words together,” South said. “As I became a professional journalist, having the opportunity to shape the public agenda for what people are talking about and to do good for a community and write stories that really made a difference.”

South began his teaching career at the introduction to the personal computer revolution. When he became the Politics editor at the Austin American-Statesman, South used computers to analyze money in politic and researched how lobbyists in their area were spending money on and who lobbyists were getting favors from state government.

From that experience South started training reporters in the newsroom, through journalism organizations, groups and then universities. A job opened at VCU in 1997 and he went full time.

“It’s interesting and unusual coming into academia through the back door. I always thought that once people discovered that I’d be back working at a newspaper,” South said. “Back in the 1990s maybe things were different and professional experience offset the need at that point for an advanced degree.”

South is a Fulbright scholar and taught journalism in China and Ukraine as a Knight International Journalism Fellow. South has taught every course in the print/online journalism curriculum at VCU including a masters level course in data journalism and Capital News Service, a political reporting class. Kane said CNS launched his professional career and with South’s leadership, the CNS program is more relevant than ever for Virginia’s small media outlets, few of whom can afford a capital correspondent.

“I’ve taught the whole gamete at VCU I think that’s why they kept me on,” South said. “I’m not intimidated about teaching something that I don’t know much about. I think journalists by definition are quick studies- we know how to learn something and to some extent we fake it till we make it.”

South remains the best thing about teaching is giving them skills that they can leverage to be professionals.

“Working with young people- watching that light bulb go off where things come together for them and they understand an idea or they get really inspired about a story possibility or about a career. Seeing students when they graduate, and setting off to launch what I hope will be satisfying careers,” South said. “Also sometimes seeing that they understand the transferability of their journalism skills- understanding that that college experience made them a better person and gave them skills that they can leverage to be teachers, lawyers, entrepreneurs that they can use in any number of different ways. So I really enjoy working with the next generation of journalists and other professionals.”

Former student Margaret Carmel said South’s guidance helped her and many other students find jobs after graduation and start the first steps toward strong reporting careers.

“Jeff South is one of those unique professors who is able to walk the line between giving you constructive criticism, but also encouraging you to chase big dreams,” Carmel said.