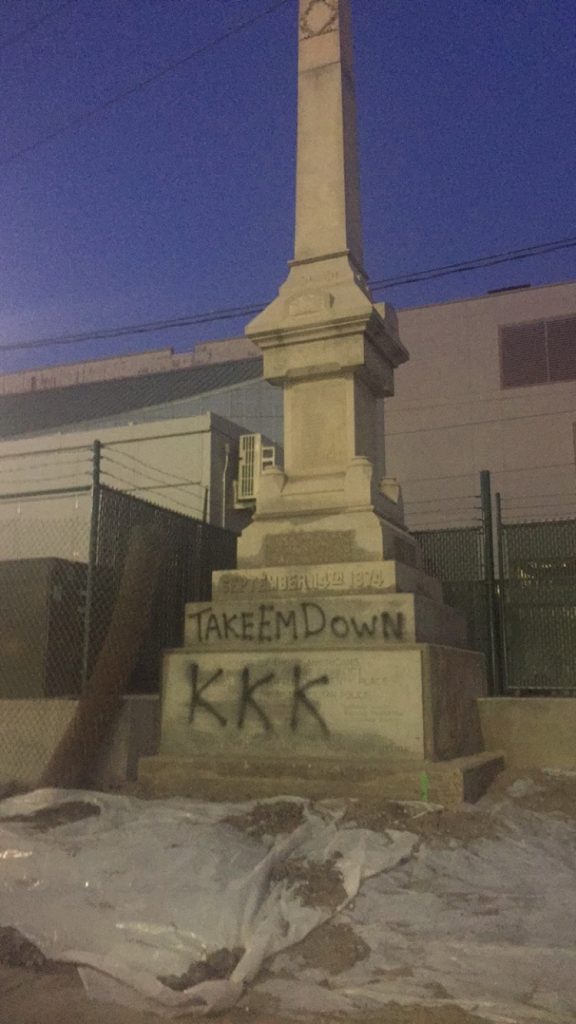 The Battle of Liberty Place monument sits on Canal St. surrounded by a barricade and plastic.

Messages are appearing on monuments across New Orleans asking for the city to act and take them down. This past June the words appeared “Take Down White Power” and “Take ‘Em Down” on multiple Confederate monuments in New Orleans. Among those monuments tagged included P.G.T. Beauregard, Father Abram J. Ryan and Battle of Liberty Place.

Tourists noted seeing the words “Take Em Down” and “KKK” on the Battle of Liberty Place this week as they walked seeing sites, as part of their Excellence in Journalism conference. Tourists interviewed did not want to go on record, but said they weren’t shocked by seeing these words, considering the racial tensions and reports across the country just within this past year. The Battle of Liberty Place sits on Canal St., surrounded by major attractions like Harrah’s Casino and at the same time it’s hidden from the main tourist strip, sitting on the backside of the New Orleans’ Aquarium . The city placed this particular monument on Canal St. before moving it into storage, during construction in 1989. The city then moved it again to the location of the battle, where these words recently appeared.

The activist group, Take ‘Em Down NOLA has a demonstration set for this weekend, where they have asked participants to join them in attempting to physically take the statues down.