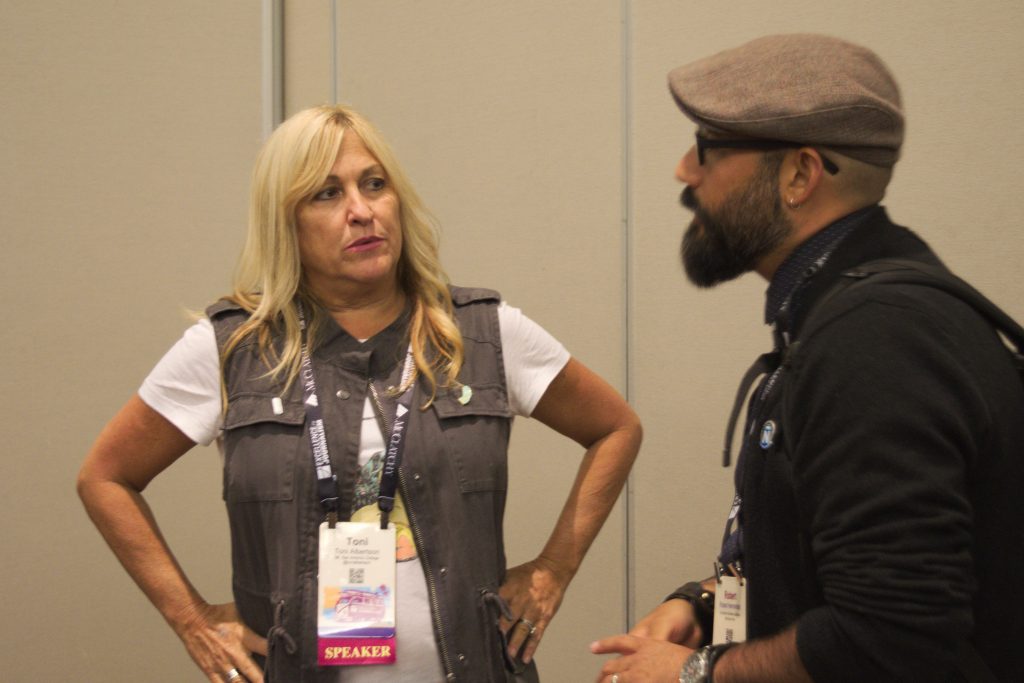 Journalism education: 4 tips to mix things up in the classroom

Toni Albertson chats with Robert Hernandez after their panel discussion on journalism education. While both have had very different academic experiences, they share a common link in leaving traditional teaching methods behind.

In the digital age, journalism is an constantly-changing industry. Even more fluid, however, is journalism education. Across the country, professors and instructors are struggling to keep up with the changing landscape and find ways to incorporate new technology and tools in the classroom.

At the 2017 Excellence in Journalism Conference, a breakout session entitled, “Speed Dating: Great Ideas in Journalism Education,” tackled those concerns. Educators offered tips and advice on how to spice things up at school with one common theme: break out of the conventional idea of teaching journalism.

While it might sound simple, the first step in making change is accepting the idea of change. Toni Albertson teaches at Mt. San Antonio College in Walnut, Calif. and advises the school’s student media. She encouraged an open mind when considering breaking old habits.

Albertson said when she began teaching at Mt. SAC in 2006, the journalism program faced low enrollment, and student publications had low readership. She led student media in a new direction — the publications moved online, no longer in print. Other initiatives included a hyperlocal news site on Twitter and a partnership with the Washington Post.

“Throw out what doesn’t work and try something different,” Albertson said. “Be prepared for anything.”

That includes failing, she explained. There were several projects that student media attempted that didn’t succeed or needed to be fine-tuned, and even those offered important lessons. Albertson’s final piece of advice encouraged trial and error.

Julie Jones, a multimedia journalism professor at Gaylord College, discussed the benefits of collaboration outside of journalism. Jones teaches her class, “Gaylord 360,” with Debbie Yount, who oversees the advertising and public relations fields at the college.

“It is a chance to merge with different sides of the college and learn off each other,” Jones said.

While the advertising and journalism professions have had a difficult relationship for years, the Gaylord College partnership opens more doors for students to see how their fields are connected. Each semester, Jones explained, the class chooses an issue in the community and focuses a campaign on that subject. In the spring, the class worked with the non-profit Regional Food Bank of Oklahoma.

“We created a campaign to bust the myths of food insecurity,” Jones said.

In addition to bringing several industries together, the goal of the class is also to highlight experiential learning.

“How can we give students real-life experiences classroom-by-classroom, project-by-project?” Jones asked. “We’re trying to find ways to bring real-world problems into the classroom.”

An easy way to solve that problem was to ditch the idea of a “classroom.” The students and professors meet every week in the field, which Jones referred to as “storytelling without walls.”

“As a teacher I think you always feel like you have to be an expert on everything, but things are moving so fast in terms of the tools,” Brown said. “If we’re going to keep journalism alive, we really need to figure out how to make it in a way that other people find relevant.”

In the master’s program, students choose a community to serve with their journalism, whether that is a geographic or demographic community. The goal is to shift the focus from what the journalist wants to write to what the audience wants to read.

“You have to think about things like building relationships,” Brown said.

Robert Hernandez is an associate professor of professional practice at USC Annenberg, and he takes a special interest in exploring new technology with his students. Often, that means Hernandez doesn’t know much about the tools his class might be using for a semester.

“I embrace the fact that I don’t know what I’m doing,” Hernandez said. “Embracing that and building that into the culture of the classroom, where we’re teaching each other and learning together, to me, is part of the secret sauce.”

In his classes, Hernandez’s students have explored 360 video production, Google Glass, augmented reality and virtual reality. The students have their own brand under which they produce VR experiences, called JoVRnalism, which has been featured on YouTube 360 and has reached as many as 182,000 views.

This opportunity arises through experimenting within the parameters of a classroom and a willingness to step outside the box — sometimes into completely new territory.

“From what I’ve learned,” Hernandez said, “experiment and ask for forgiveness instead of permission. Find loopholes to make this stuff happen.”