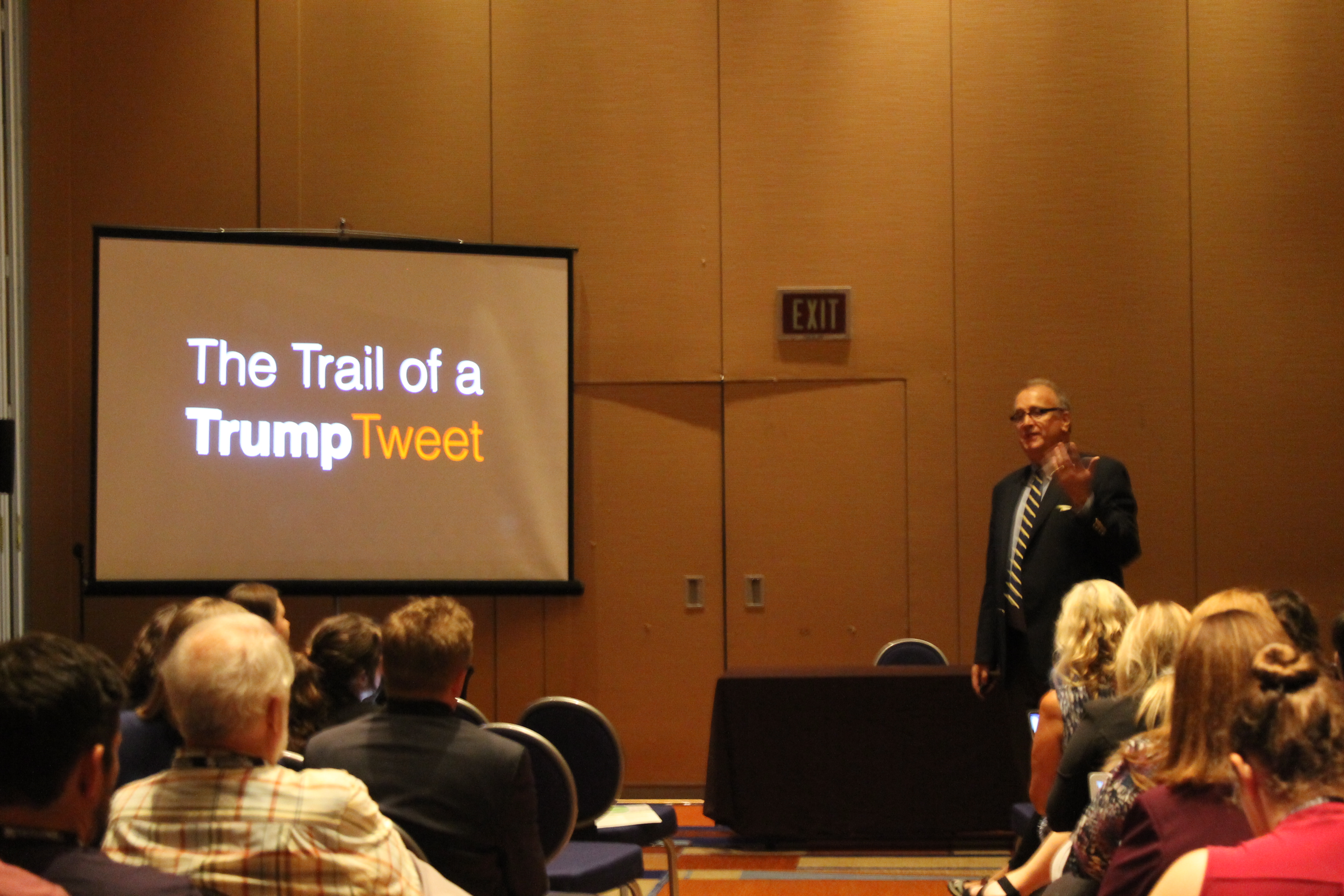 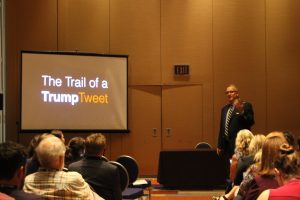 Al Tompkins gives a lecture about fake news at EIJ18.

Al Tompkins of Poynter Institute hates the term “fake news” that you could hear it in the bluntness of his tone when he opened his lecture, “Critical Thinking to Fight Fake News” at the Excellence in Journalism 2018 Conference.

The lecture provided a biting take on the spread of misinformation by showing real-world examples of  actual fake news and demonstrating how fake news can be manufactured and spread.

In his first demonstration, Tompkins detailed how screenshots with fake headlines are created.

Al Tompkins shows the audience how easy it is to change the headline on a webpage to spread fake news. #EIJ18 @EIJ_News @spj_tweets pic.twitter.com/IuTsSmn6DO

Tompkins learned the trick of modifying a simple computer code from an 8th grader, who used it to “improve” his grades to avoid getting in trouble with his parents. Tompkins said it’s something anyone can do.

This is just one example he showed of the many ways that fake news proliferates itself. Tompkins believes that the issue is very real, and wants to help journalists get the tools they need to identify, and fight fake news.

“This isn’t just a phrase, it’s actually a thing that some people believe, that the job that we’re doing is completely made up, or partially made up,” Tompkins said.

Tompkins acknowledges that these people have always existed, and believes that recent changes in technology and the field of journalism has exacerbated the issue.

“I think that there is, partly, by the Trump movement, partly by conservative radio, and Fox News and other places, I think there is a significant movement of people who have their own beliefs and any truth will do,” Tompkins said. “Again, there isn’t anything new about this. What is new, is access is so much easier, so these fringe groups haven’t always had the kind of access that they have now, and they’ve not have the ease with which to propagate their nonsense. It’s easy, within half a second to create something that’s totally believable.”

One recent example he shared was the widely circulated figure of 500 million straws that are consumed every day, and the claim that most of which end up in our waterways and harm the sea turtles. The claim has made by numerous news outlets as well as activist websites. NBC was one of them. They have since retracted the claim.

Correction: An earlier version of this article included a debunked statistic that Americans throw away 500M drinking straws a day, or 1.6 a day per person.

Previous tweets with the article will be deleted, and an updated tweet will be issued. https://t.co/ST63JhlMsT pic.twitter.com/GyJfB99dkU

The claim that so many outlets were citing turned out to have been calculated by a 9-year-old from Vermont named Milo. Though some organizations have chosen to trust his statistic, it has not been verified.

Tompkins also addressed some of the motivations behind spreading fake news. He cited politics, chaos, and one that may come as a surprise: money.

“Until now, fake news hasn’t been easy to monetize but now it is because you can get paid by impression,” Tompkins said. “So there’s actually a monetary motivation, not just a political motivation or a chaotic motivation to do something fake.”

One such company is Crowds on Demand. The company provides hired actors for protests, phone-banking initiatives and will even create non-profit initiatives, “to advance your agenda.”

To fight fake news, Tompkins believes that journalists should ask themselves four questions:

The session seemed to have a lasting impact on the audience of about 60 people. One of those audience members was Tim Tunison, the News Director at WBLA-TV in Baltimore.

“I learned to not always believe your eyes,” Tunison said. “It makes me think about breaking news coverage in the media, and how we are jumping at facts and looking for new things to put on the air, and how quickly we can be deceived by something that looks real and authentic. Perhaps it’s time we slow down and figure out how we know what we know, and see if that’s better.”

Tompkins emphasized critical thinking as a tool to fight fake news, but there are technological tools as well. Sam Stewart is a trainer with the Society of Professional Journalists. He goes around the country educating journalists about the different kinds of tools that are available to them through Google to enhance their storytelling and help fight fake news.

“What are the things you can use to help verify claims?” Stewart said. “One of the things on the bleeding edge is, we showed a video that the BBC verified out of Cameroon where they did things like utilize Google Earth to look at topography, they looked at how people’s shadows are thrown across the ground to estimate what time of day it was.”

Stewart emphasized training, such as his training and attending conferences like EIJ. Lastly, he emphasized time spent verifying stories.

“Everyone wants that silver bullet, but it’s not out there yet,” Stewart said. “I think we will definitely win in the end, but I think it’s something that’s not going to be tomorrow. As the people who are putting out the manipulations evolve their tactics, our tactics have to alter as well.”