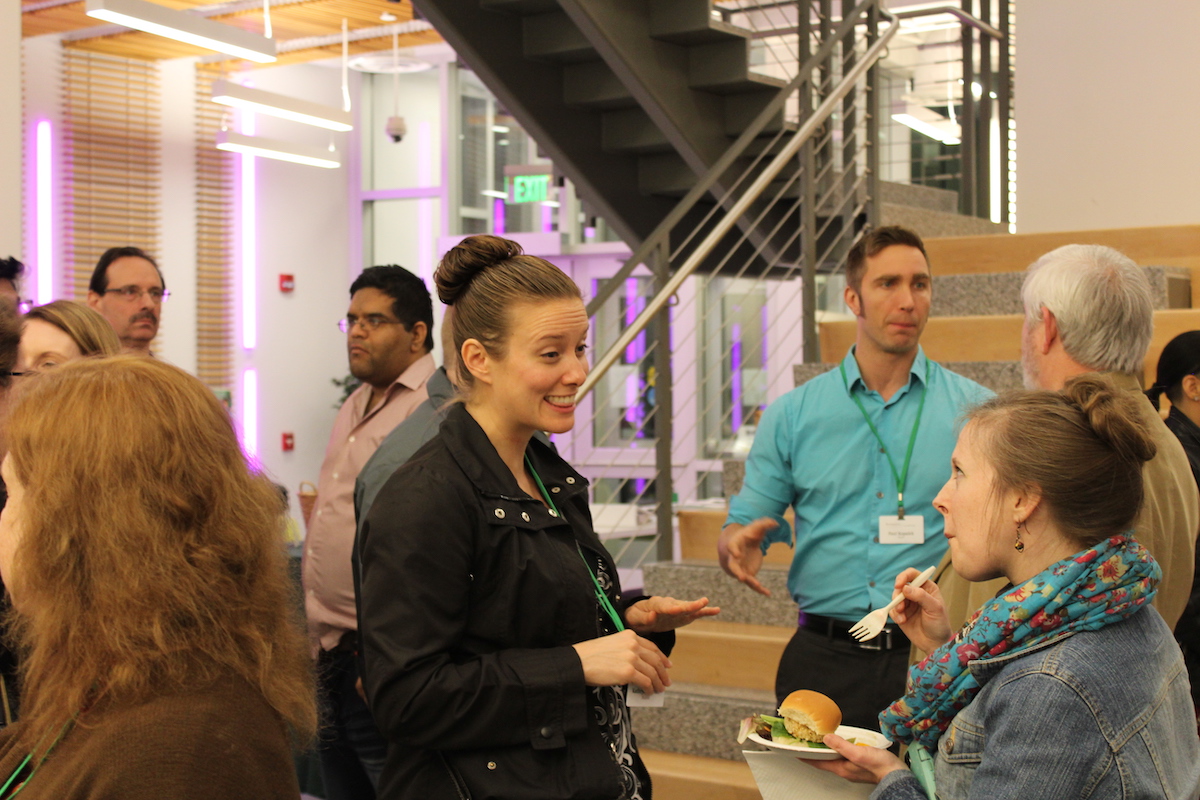 Are you an introvert? Here’s how to make the most of EIJ.

When entrepreneur Rachel Jenks attended her first networking session, she was so nervous, she forgot to take off her coat. She kept the thick winter jacket on as she mingled, struggling to maneuver through the crowd.

“It was probably 90 degrees in the room, but there are pictures of me with my coat on the entire time,” Jenks said. “Sweating profusely.”

Today, the self-described introvert credits early networking with the success of her graphic design brand.

“When I launched my company and started networking, it was the number one way that I grew my business. But it was hard, and I’d come home and be exhausted.”

Here are some tips for networking and navigating conferences such as EIJ as an introvert:

“I do love talking to people and I love meeting people, but I just do feel so drained after that,” she said. “I can’t do that for four days straight.”

At a conference like Excellence in Journalism, schedules can be packed from early morning through the evening. On Thursday alone, there are more than 30 different sessions.

Okrepkie faced a similar situation at the Online News Association (ONA) conference in Austin in early September. It was the 22-year-old’s second time there, and she came equipped with a different strategy this time around.

Each morning, she woke up for a run along the Colorado River in Downtown Austin, ending each one with coffee at a shop near her hotel.

“I still was around people and could feel the vibe of the conference but was very much recharging my own battery,” she said.

If you’re lucky enough to be staying at the conference hotel, your room can be the perfect place to take a break.

I went back to me hotel room to decompress at least three times a day at #EIJ17 and #AAJA18. And I made sure to have one meal alone where no one from the convention would find me.

Coming to terms with the fact that you’re not going to meet everybody is a good idea, Jenks, the entrepreneur, said. Instead, create a list of key people and try and talk to them one-on-one.

Have a couple of talking points ready to go after the introduction, and don’t think all is lost if you make a mistake. Or leave your jacket on the entire time.

“Everybody is awkward,” Jenks said. “The reality is that everybody is feeling the way you are, whether they’re an extrovert or an introvert.”

With hundreds of people clad in business attire and many clutching resumes, professional pressure can kick in hard at conferences.

Jenks recommends viewing each interaction as a possible friendship instead of the connection that might change your career. Sometimes small talk can lead to a meaningful connection, she said.

“If you’re making a new friend, it shouldn’t feel different than making a new business contact, but it does. Reminding yourself of that just takes some of the pressure off to have everything right.”

5. Turn down the FOMO (fear of missing out)

From a tour of Camden Yards to a breakout session that sounds hand-crafted for you, it’s tempting squeeze in as much as possible.

But to get the most out of a conference, Okrepkie said, introverts should be deliberate about their self-care.

“A big thing for me was not feeling guilty about not taking the time to recharge my battery,” Okrepkie said. “You’re at a conference to learn and to meet people, and you can still do all of those things if you take an hour out for yourself.”