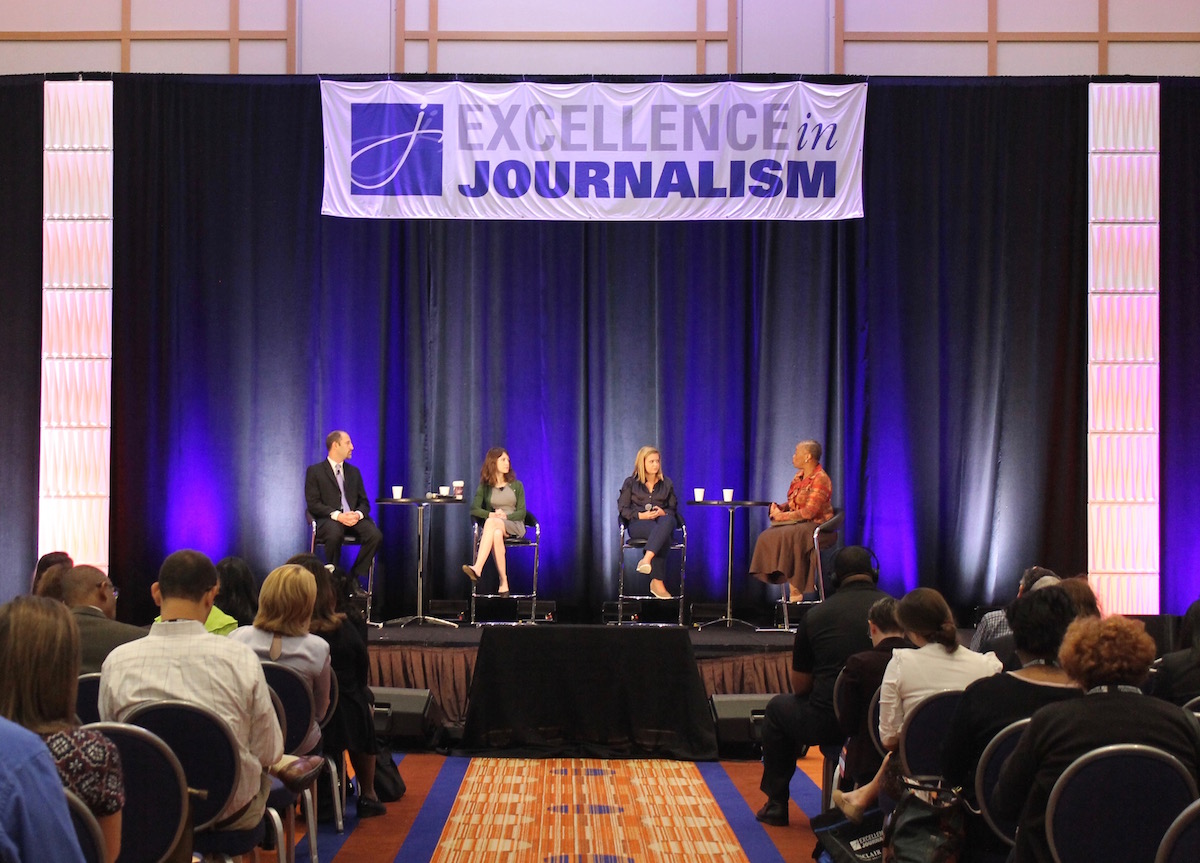 Me Too: What Journalists are Thinking About and What’s Being Done to Fix the Problem 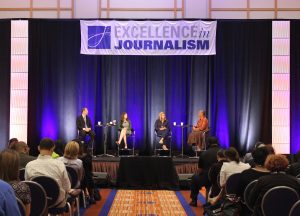 The other panelists were Anna North, a reporter at Vox who wrote stories during the #MeToo Movement, and Avi Kumin, a lawyer who specializes in sexual harassment. They shared their personal experiences with the audience.

Brittain talked about one of her methods of verifying facts during the Charlie Rose story. She had one of his accusers draw a map of his property, and used Google Earth to verify that it was, in fact, his property.

“There was no fact too small to check on a story like this,” Brittain said.

North described one story that she covered where a source was actually taking notes as she was being sexually harassed.

Audience members had the opportunity to ask the panelists questions as well. One of the main concerns voiced by the audience was how to cover a story and remain empathetic.

North emphasized the importance of being empathetic toward the accused as well.

“In order to be a good journalist, you have to be able to put yourself in the shoes of everyone in your story,” North said.

Laura Palumbo was attending the panel as well. Palumbo is the Communications Director at the National Sexual Violence Resource Center. She works with people from all sorts of fields including higher education, law enforcement and journalism. SVRC provides resources to journalists about how to cover stories that deal with sexual violence. They provide statistics and information and help journalists cover the issue sensitively and empathetically.

“You’re going to be best positioned to offer that empathy and patience if you do your homework, Palumbo said. “Everyone is at a base level is familiar with the fact that yeah, sexual violence, sexual assault is something that’s stigmatized, but if you know the facts about the significantly low rates of reporting, and you know the main barriers to reporting, and why victims don’t come forward, the main fears and barriers that the victim’s facing, it positions you to be as empathetic as possible.”

Palumbo provided an example of how to be more empathetic in her coverage.

“When you’re saying that a child performed oral sex on an adult, or even if it was not a child, if it was an adult, it absolutely assumes that it was consensual, or it puts the person who is bringing forward an allegation of being a victim in the position that they’re the one taking the action rather than being victimized,” Palumbo said.

SVRC recently partnered with the Center for Disease Control to create a resource for journalists to use when covering sexual assault empathetically.

Journalists aren’t just covering #MeToo. The journalism industry is plagued by the problem as well.

Geisler is working to fix that problem. The Society of Professional Journalists created a new type of training program to try and address sexual harassment in the journalism industry, The Power Shift Project.

“It first met in January,” Rebecca Baker, President of SPJ, said. “Myself, the leaders of other journalism organizations, leaders of newsrooms, gathered at the Newsuem to discuss this scourge that’s not only happening in newsrooms but in workplaces across the country, and what can be done to stop it before it even happens, and creating an inclusive culture, a diverse culture, a culture where bullying and bad behavior are not tolerated because tolerating that kind of behavior, ‘jerk’ behavior as it were often leads to worse behavior down the road, so demanding a culture of respect really is the first step of combatting this in newsrooms.”

In Geisler’s session “Power Shift: Workplace integrity,” she detailed the programs three pillars that are intended to do just that.

The first is critical thinking. The training has participants break down common statements that can cause problems in the workplace with critical thinking. She had audience members at the session do the same. They were active, responding to phrases like “It’s just his first offense” with biting quips, like “That we know of.”

“He’s handsy” is a term that Geisler seemed to take special issue with.

“I always say when you hear the word ‘handsy,’ why don’t you subsititue the word ‘molesty,’ because ‘handsy’ diminishes the fact that someone is touching you in ways that you don’t like,” Geisler said.

.@JillGeisler debunks statements that diminish the seriousness of sexual harassment in the workplace. #EIJ18 pic.twitter.com/Z5mgJy4QtE

The second pillar is having difficult, “Courageous Conversations” to address issues in the workplace. She outlined the importance of criticizing behavior, not people in order to have difficult conversations productively.

.@JillGeisler says it’s important to call out behaviour rather than making general statements like “Don’t be an asshole.” #EIJ18 pic.twitter.com/gCO3N6tOoW