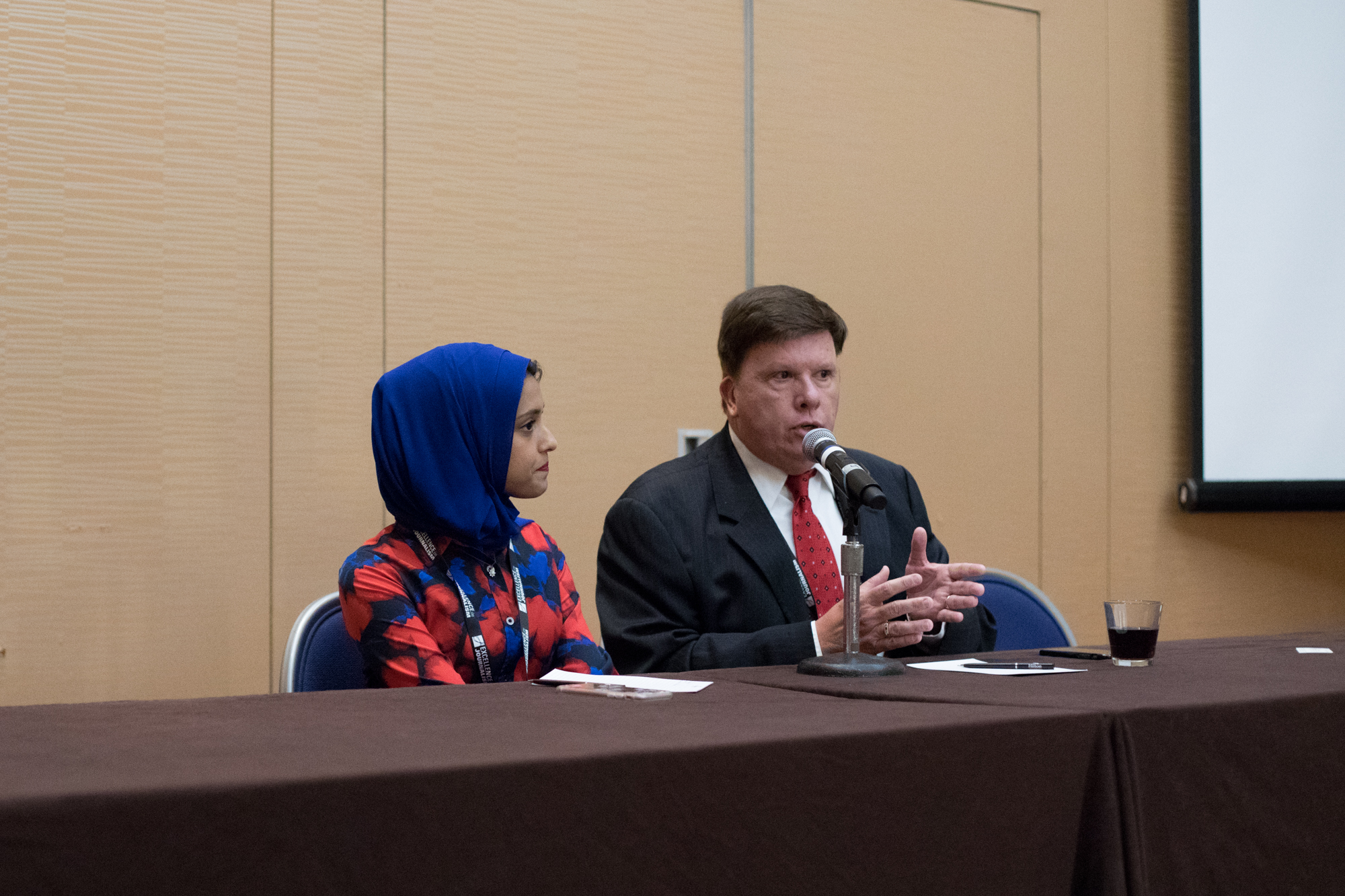 Who’s Really to Blame for the Lack of Diversity in Newsrooms?

Despite decades of discussion on newsroom diversity, the field of journalism continues to be marked by obstacles. Obstacles that reveal themselves in the stories of those who have overcome.

Tahera Rahman is an individual whose journey has inspired her community, region and nation. In February 2018, she achieved her childhood dream – to be on air. As such, she became the first hijab-wearing television news reporter in the United States.

At a breakout session titled “Hiring Managers: Diversity Isn’t a Pipeline Problem. It could be You,” Rahman shared her story alongside Mike Mickle, the news director who hired her.

The session was moderated by Will Federman, The Tylt executive editor.

Rahman is grateful to her station WHBF-TV, a CBS affiliate in the Quad Cities, for spearheading change.

“In a lot of ways, some of those obstacles that traditionally minorities have experienced are already eroding,” Rahman said. “I think putting someone like me on air is a huge step – and I credit my station for that.”

For years, managers had told Rahman that she’d have to lose her hijab before being a broadcast reporter, but she did not back down.

She spent years as a radio producer, shadowing other reporters, getting to know the community and working her way up. Along the way, she said she realized the process wasn’t going to be “a straight line.” By the time she was considered for the full-time on-air multimedia journalism position at WHBF-TV, she had more experience and skill than most of her competition.

Mickle said it made the decision simple.

“It really came down to: why would we not do this?” Mickle said. “It’s called doing the right thing.”

Though there were fears about Rahman’s safety and how the community would react, the response both locally and internationally has been largely positive. For every negative comment or encounter, Rahman said she experiences two dozen positive ones.

“My philosophy has been to keep the negative comments on there because I think it’s important to see the entire situation. We’re talking about journalism. That’s part of my story too,” Rahman said.

Last week, Rahman experienced her first racist comment on the job. The person she was interviewing and two other community members chased the man away.

She has hope that, eventually, her hard work and skill will be of more public importance than anything else.

At the session, Beth Konrad, a professor of Rahman’s from Loyola University, took a moment to recognize Rahman’s success.

“[Tahera is] into this for life. She’s a journalist in every way, on all accounts,” Konrad said. “She has broken a barrier that, as time goes on, people aren’t even going to know existed. She’s that good.”

Yet, the question remains: what is that barrier?

Jam Sardar, news director at WLNS-TV in Lansing, Michigan, said he believes the issue isn’t the hiring manager – but the pipeline itself.

Rahman said she agrees that the pipeline is also an issue. When she speaks at schools, she said she often leaves with a message for the parents, “You’re the one that controls the atmosphere in your household.”

To the kids, the dreamers, she says, “It is so easy to stay in your bubble, but that’s not where the magic happens.”

And to the audience at the session today, “The pipeline needs to start being built.”

After controlling for factors like gender, labor market conditions and occupational groups, a recent study found there have been no changes in levels of discrimination against black job applicants since 1990.

Other studies have looked into the whitening of resumes, including how one’s name influences callback percentages. Pew found that 75 percent of U.S. Muslims believe there is a lot of discrimination against Muslims in the country.

Through all these figures, at least one thing is certain: the efforts of Rahman and other powerhouses who represent minority communities in this field are making tangible change.

Mickle said he has seen an increase in diverse job applicants since Rahman assumed her role. Additionally, he said her presence renewed a sense of pride in the station employees.

When she’s not at work, Rahman is invited to speak across the region, and at schools, where she interacts with children who have seen her on television. One boy in a NASA T-shirt claimed he was her “biggest fan.”

Building trust within her community is also something Rahmen is particularly good at. She said she has been entrusted with two ledes as a result of building this rapport.

“I think [having this representation] establishes a trust with the station and within the community.” Rahman said. “Growing up in an American-Muslim community all you hear about is the distrust of the media. Now, I’m finding myself on the other side of it. Now that they are seeing people like them on TV, it does establish trust.”

All in all, Rahman said she is just happy to be doing what she loves.

With tears in her eyes, Rahman recalled her first day on the job, “It sounds really cliche, but I’m sitting in the edit bay and putting everything together and it just… I remember sitting there in that little box thinking ‘This feels so right. This is what I could see myself doing for the rest of my life.’”

While the solution to solving the bias of hiring managers and developing the diversity pipeline isn’t black-and-white, Federman said, “These are the kind of conversations that people need to have. That can change things.”

Previous story
Mental Health in the Newsroom
Next story
Distrust in Media: Searching for Solutions
The SPJ News