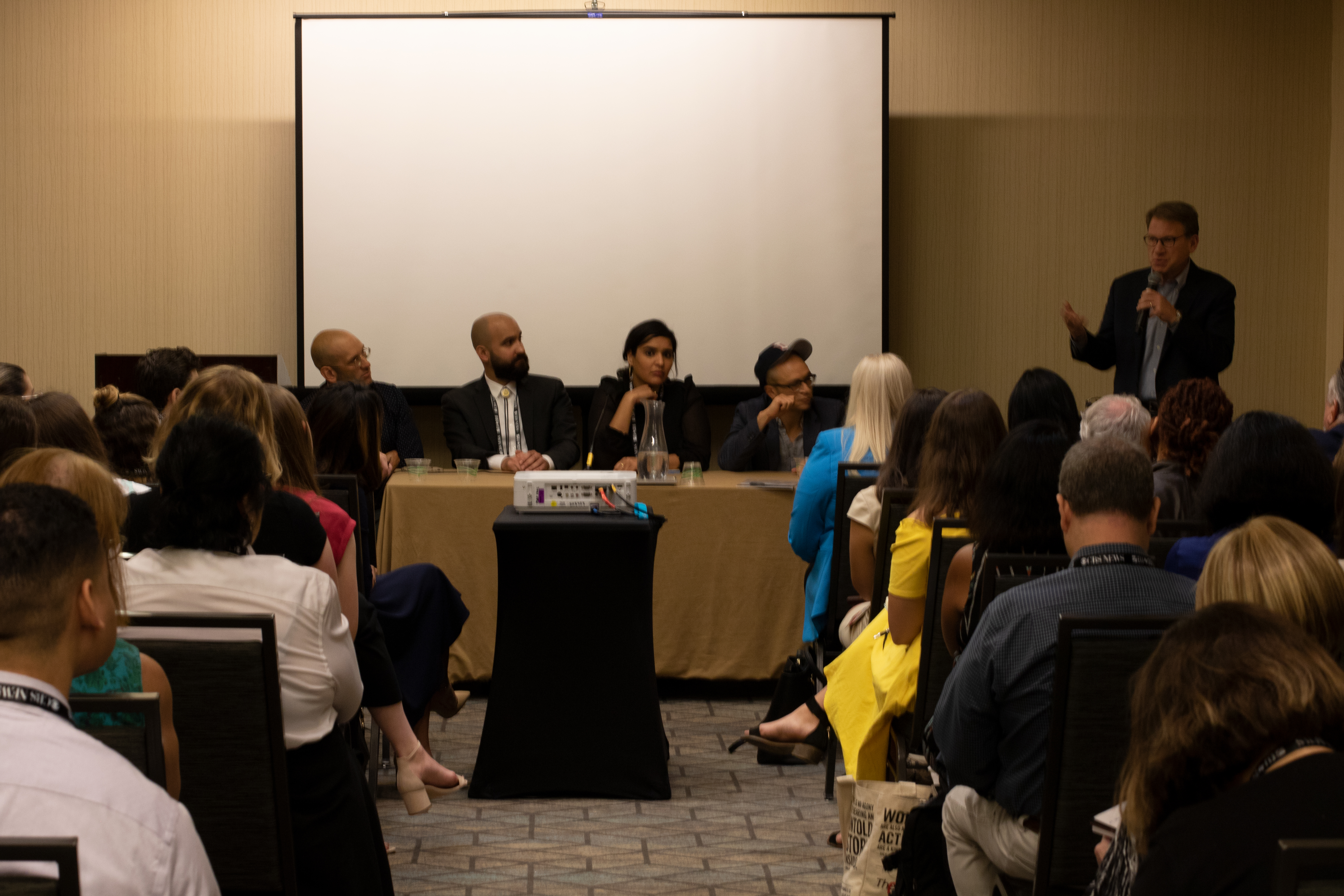 Over the course of its history, the Atlantic magazine has only endorsed three presidential candidates: Abraham Lincoln in 1860, Lyndon B. Johnson in 1964 and Hillary Clinton in 2016.

Editor-in-chief Jeffrey Goldberg said the endorsement of Clinton was not a partisan one; it was rooted in concerns about the temperament of her opponent, now-President Donald Trump. In the endorsement editorial, Goldberg himself wrote “he traffics in conspiracy theories and racist invective.”

In the wake of Trump’s victory in 2016, the country has seen a rise in white nationalist rhetoric and violent actions corresponding to that ideology. In response, the Atlantic adopted a mission to not only cover white nationalism, but to contextualize it.

Editors and reporters from the Atlantic held a panel at the Excellence in Journalism Conference on “Covering Extremism In The Age of Trump” Sept. 6. The panel, headed by Goldberg, featured managing editor Swati Sharma, video production manager Brian Jimenez and staff writers Alexis Madrigal and Adam Serwer.

The discussion revolved around using ethically sound journalism practices when covering extremism, including a willingness to use the word “racist” in a story when something is truly racist. Sharma says organizations shouldn’t shy away from using the word when backed up by facts.

Sharma also said it is important to not only cover, but contextualize white nationalism; its origins, its roots and its implications to other aspects of life, including the internet and general culture.

“It’s our responsibility to go a couple steps deeper,” Sharma said. “To tie everything together.”

In some cases, this context is historical. Serwer’s work over the last few years has revolved around “excavating historical antecedents of Trumpism,” studying not only the effects of Trump’s policies but also activity on the fringes by white nationalist extremists, including the shooting in El Paso in August.

Serwer cites documents such as W.E.B. Dubois’ “Black Reconstruction,” as well as other historical items about eugenics from the early 20th century and prisoner-of-war camps from the 1860s.

There are concerns about amplifying white nationalists by covering them. Goldberg pointed to the Atlantic’s own coverage of Richard Spencer, director of the National Policy Institute who identifies as a white nationalist. The Atlantic’s Daniel Lombroso captured a video of Spencer and a group of nationalists performing chants and Nazi salutes following Trump’s election.

Serwer, however, said the Spencer video was important to being able to refer to Nazis as Nazis.

“The media environment for Richard Spencer prior to that video was not what you would call hostile,” Serwer said. “These people have been covered as sort of like a curiosity…people were using euphemisms like ‘racially charged’ to describe actual Nazism.”

Jimenez said that for nationalists like Spencer, the main goal is to inject white nationalist ideas into public policy.

“Those ideas aren’t just in the realm of the theoretical anymore,” Jimenez said. “It’s actual public policy that’s happening with regards to detentions at the border, undocumented immigrants coming into the United States and being treated the way that they are.”

For Jimenez, representing the effects of these policies visually is important. He recalls a story about a Honduran asylum-seeker named Anita who was reunited with her son Jenri after being forcibly separated at the border. After a month of separation, Jenri had sustained psychological trauma from the separation, feeling alienation from his mother, even saying “you don’t love me anymore” and “you’re not my mom anymore.”

Madrigal and Serwer said that even if Trump loses the 2020 election, the ideas being put forth in public discussion have been part of American history for a long time and may simply take on another form.

“If the text goes back to being subtext,” Madrigal said. “Instead of people saying racist things, they become dog-whistles again. What is the media going to do then if people are fundamentally pushing the same policies?”

The resounding answer: remain diligent and maintain principles for the future.

“I think it’s so incredibly important to stick to [our principles] right now, because…if we decide to call something that Trump says racist, it’s based on what we as a society have determined is racist,” Sharma said. “That’s not based on opinion. That’s based on fact.”