Surrounded by dozens of journalists, many hispanic, Castro addressed the reality of the situation. “In an ideal world, would we have guns?” asked Castro. “The answer to that is no we would not, we would have no use for them.”

Castro acknowledged the second amendment and Supreme Court decision in District Of Columbia Et Al. V. Heller that sketched out that we have the individual right to possess a firearm but argued that we could work within the contours of that decision.

“I believe that we need to impose stronger regulations to ensure that people who should not have their hands on a weapon, do not get it,” said Castro.

He continued, “and certain arms that are basically weapons of war, made for war, are not out on the street.”

Castro said the way to reconcile that with where the country is currently at is with common sense gun control. He proposed universal background checks, a 7 day waiting period, an assault weapons ban, and a gun buyback initiative. Among these things Castro said he was connecting the dots between guns and mental health.

“The Republicans use mental health as an excuse for never getting to the issues of guns. When I think about the mental health issue I think about the fact that more than half of the people that die per year by gun die by suicide but we hardly talk about that,” said Castro. He continued, “if we invested in mental health people who have depression or bipolar disorder or something that leads them down that well of despair and eventually take their own life we could make sure they get the help they need.”

In addition to common sense gun legislation with mental health considerations, Castro said that his campaign was focused on eliminating extremism.

“We need to move out this extremism. This white nationalism, supremacy that rears its ugly head before it turns into what we say in El Paso a couple of weeks ago,” said Castro.

The mass shooting in Odessa and Midland, Texas leaving 7 people dead and 22 injured came just four weeks after the mass shootings in El Paso, Texas and Dayton, Ohio. The El Paso shooting is being investigated by the FBI as an act of domestic terrorism and a possible hate crime. The shooter posted an anti-immigrant manifesto shortly before the shooting which killed 22 people and injured 24 others. The likely racially motivated attack left the community shook. Hours later, in Dayton, Ohio a separate shooter killed nine and injured dozens in a nightlife district. 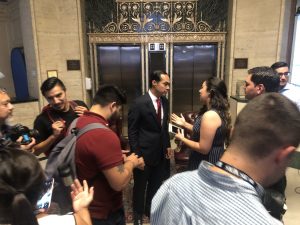 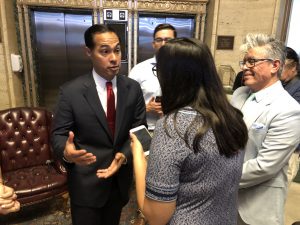