Fellows who volunteer for EIJ News, the student newsroom at the Excellence in Journalism Convention, work long hours and on tight deadlines.

The fellows received a visit today from Maria Elena Salinas 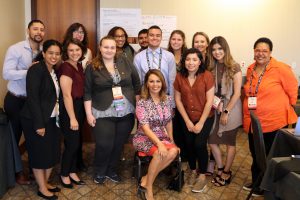 , one of the best-known anchors in Spanish-language broadcasting, who is now a contributor to CBS News.

Salinas spent more than three decades at Univision where she was co-host of Noticiero Univision, the network’s nightly news program.

She told the students that they should not be discouraged at a time when it is “tough to be a journalist.”

“There are so many people out there that want to discredit the work that we do but just ignore the noise around you,” she said.

Salinas left Univision in 2007 and is expected to contribute reports to various CBS News broadcast programs and help with coverage of the 2020 election.

Previous story
Covering White Nationalism With Context and Clarity
Next story
Maintaining an ethical presence on Twitter: Why & how
The SPJ News