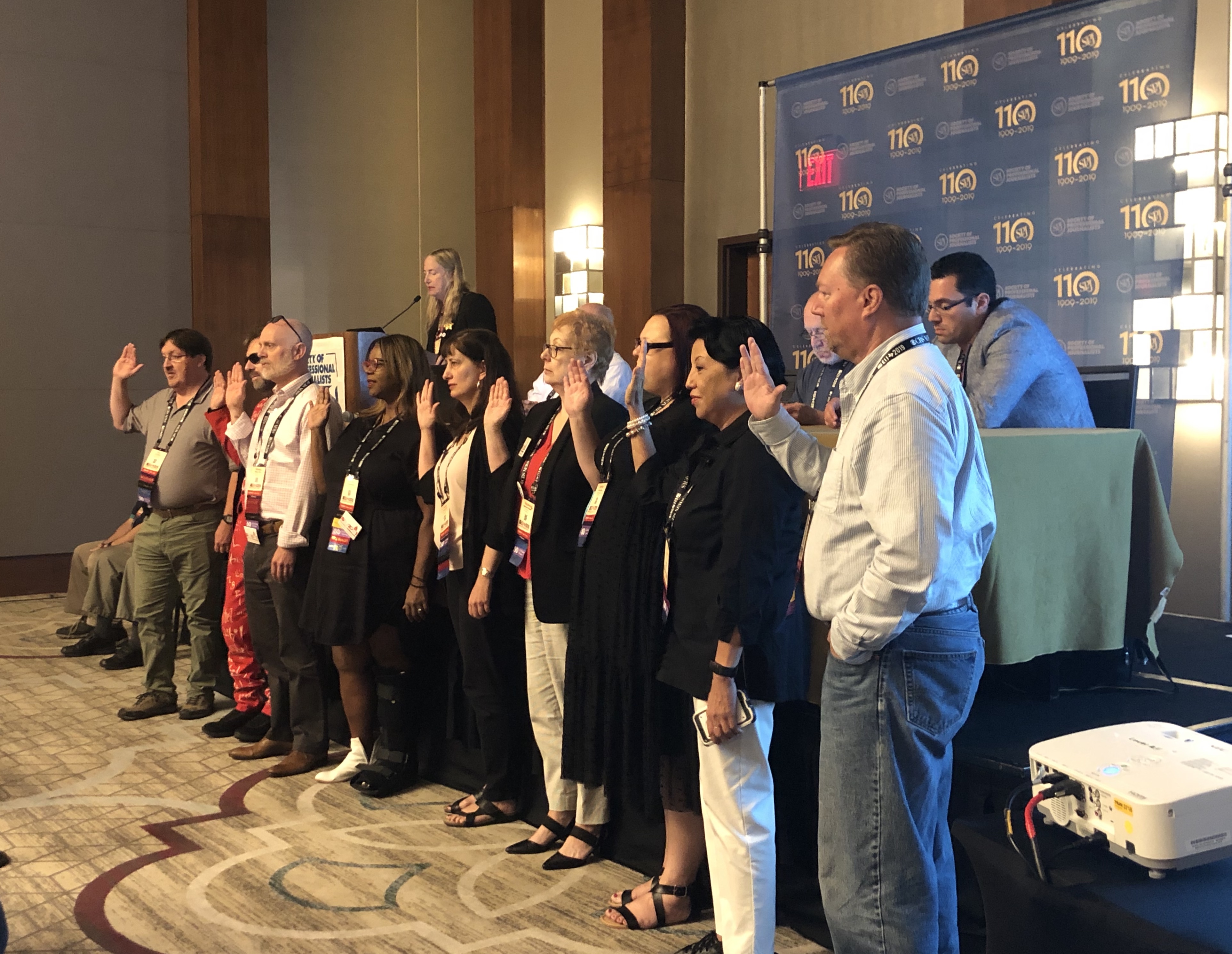 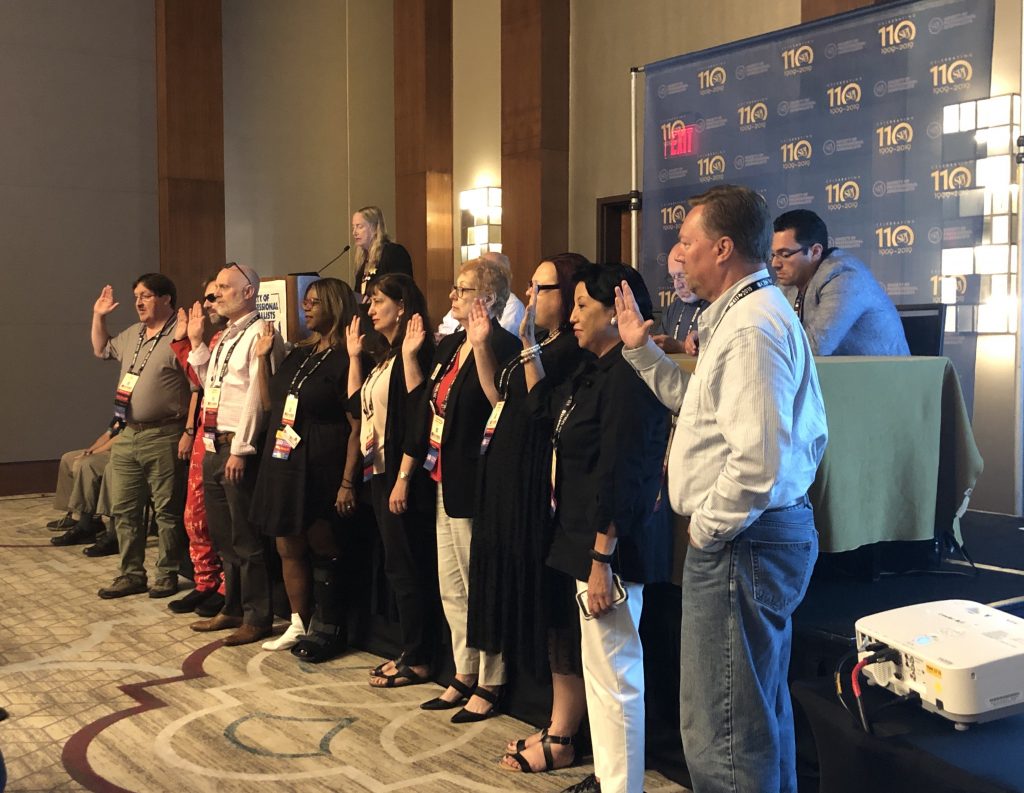 [Please note: An earlier version of this story incorrectly reported that Haisten Willis received 371 votes in the race for At-Large Director. This has been corrected to the actual total of 171 votes. The EIJ News regrets the error.]

Today was election day for the Society of Professional Journalists (SPJ) in San Antonio, TX.

The new SPJ Presidential-Elect for 2020 is Matthew T. Hall. He previously serves as Secretary-Treasurer.

In his campaign biography, Hall says he changed how SPJ handles minute meetings by preparing them right after meetings ended to increase transparency and speed up the process of approving and posting them.

Hall has served in many leadership positions with the society since 2014, including board member and various committees.

His previous leadership roles in SPJ includes president of the San Diego Pro chapter for two years; Region 11 director elected to the national board at EIJ in 2014, 2015 and 2017.

Outside of SPJ, Hall is an editorial and opinion director for The San Diego Union-Tribune.

There was some controversy when it was announced that 13 people did not receive their regional ballot. SPJ has approximately 5,700 members.

“We discovered that a few members were not given the option to vote for their regional coordinator race. After a thorough audit, we discovered 13 members who had already voted in the national election and had not received the regional ballot,” according to a statement released by SPJ’s Jennifer Royer.

A total of 1,001 members voted in this year’s election.

As you read this article, it is important to note that the title Region Director has been changed to Region Coordinator.

Koretzky, who came in second to Hall, is currently the Region 3 director, and was elected Region 3 coordinator at this years election in San Antonio Texas.

Throughout her term as secretary-treasurer, Aguilar would like to make SPJ more diverse by working with other journalism organizations.

“Diversity is key for our organization to survive. I want to continue coming up with ideas that can help our chapters attract people of different backgrounds (ethnic, age, religion, etc) and keep them as part of SPJ.New blood brings in new ideas. All voices should be at the SPJ table,” Aguilar said.

During her time as Diversity Committee Chair, Aguilar reduced the committee to only seven members.

She also assisted with adjusting the Dori Maynard SPJ Diversity Leadership Fellowship by making the application more accessible for applications. This resulted in having a record number of applicants this year, 21.

Outside of SPJ Aguilar is a freelance contributor for White Rock Lake Weekly, Latina Style Business Magazine, and Guest Lecteur at Richland College in Dallas, TX to name a few.

There were 6 candidates that ran for At-Large Director.

This year, two At-Large directors were elected. Lauren Barlett with 391 votes, and Yvette Walker with 571 votes. Both elects served in this position last year.

Other candidates for At-Large director are John Brewer with 120 votes, Ivette Davila-Richards, current At Large Director, with 277 votes, Michael Savino, Current Director At Large with 282 votes, and Haisten Willis with 171.

Bartlett currently serves as SPJ’s Director At Large, is a member of the SPJ national board; and serves as an Ethics Committee member.

As an At-Large Director Bartlett will focus on being more organized in terms of creating and achieving goals. “I want to see SPJ clearly define itself and excel at those core issues on behalf of its members and all journalists. We can do that by adopting clearly defined goals and creating a path for the Society to focus on those goals, which will come from a long-term strategic plan the board is expected to adopt in the next year. For a long time we have tried to be everything to everyone, and no organization can do that effectively,” she said.

During her time on the Ethics Committee, a position she’s held since 2010, helped adopt the revised Code of Ethics.

Outside of SPJ, Bartlett is the Senior Director of University Communications at the University of Southern California.

Walker currently serves as an At-Large Board Member.

She has several plans as an At-Large Board member, “SPJ’s next focus must be on reconnecting with journalists and industry members, recruiting new interest in the organization. What makes SPJ important and how can we work with media partners efficiently? Where is our place at the table? I say it is helping cut through the noise of those who criticize media, funding important efforts to keep journalism free, and training and energizing today’s journalist,” she said.

As a member of the At-Large board, Walker has edited the latest edition of SPJ’s Ethics tome, “Journalism Ethics: A Casebook of Professional Conduct for News Media” by Fred Brown, and help recruit younger members.

Outside of SPJ Walker is the Assistant Dean of Student Affairs at the Gaylord College of Journalism and Mass Communication at the University of Oklahoma.

As Region 2 coordinator Overman’s plans are to, “Work to help improve the flow of information about membership and dues status between headquarters and chapters,” she said.

Her major accomplishment during her time in SPJ includes updating the New Jersey chapter’s constitution.

Outside of SPJ, Overman works as a freelance journalist specializing in labor and health issues.

His main goal in leadership throughout the year was to rename SPJ as the Society for Professional Journalism. At last year’s convention, Koretzky claims that an SPJ past president accused him of, “playing a con game.”

In terms of his thoughts on change in SPJ Koretzky says, “There isn’t one. SPJ doesn’t want to change, and I’m no longer enthusiastic about changing it. I will keep taking its money, though.”

Outside of SPJ, Koretzky is the editor in chief of Debt.com.

Joe Radske was re-elected as Region 6 coordinator, he received 31 votes.

While serving in this position, Radske assisted with giving more grants to his local chapters for their programs.

As region 6 coordinator Radske has two main goals, “Our biggest challenge right now is the hiring and integration of a new Executive Director. My input in the process as a SPJ leader will always be to make sure our members are served and our chapters are flourishing. We are also challenged with serving our non-chapter members. It’s my goal to continue to reach out to them and to make sure their voices are heard on a Regional and National level,” Radske said.

Outside of SPJ, Radske is a News Director at KVRR-TV.

Donald Meyers was re-elected as Region 10 coordinator with 37 votes, a position he has held since 2017.

While serving, Meyers has been an advocate for national committee chairs getting their conference registration paid for. As well as assist in creating the Black Hole Award..

Meyers previously served as Region 9 director (2010-2014) and a member of the national FOI committee.

As region 10 director Meyers would like to, “push for making sure we are known as the foremost advocates for journalists.”

As region 11 coordinator Krol says she will, “support and advise the board on my region’s needs and issues.”

Throughout her time in SPJ, Krol served as Secretary and Vice President of the Valley of the Sun Pro Chapter.

Outside of SPJ, Krol works as a freelance journalist.

The new Region 12 Coordinator is Jennifer Ellis who won with 73 votes.

Part of her goals as Region 12 director, “See more communication and collaboration between chapters and members on a regional level. I plan to create a Region 12 blog to spotlight our members and highlight the amazing work they are doing, and keep a dialogue going throughout the year,”

Ellis previously served as President of the Arkansas pro chapter. During her time as president, she increased attendance at Region 12’s annual conference, and assisted in hosting events and networking events in Arkansas.

Outside of SPJ, Ellis works as a Zoned Editions editor for the Arkansas Democrat-Gazette.

“I am very inspired by the work that SPJ is doing, and I believe that this next board will be a strong board. I believe that a lot of work done this year will put them in a good place to move forward and build on the deeds of the society.”

The election results are as follows:

Previous story
Tips for Reporting on Suicide
Next story
Be safe rather than sorry: Journalists in the field
The SPJ News