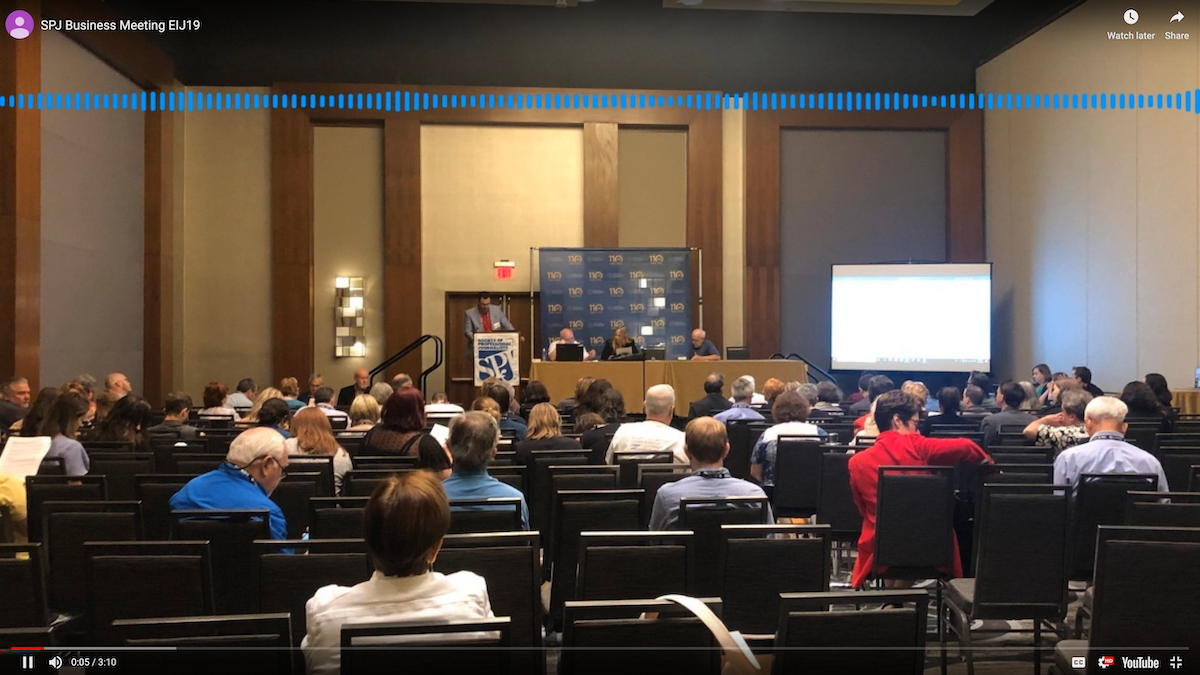 SPJ held its annual business meeting during the EIJ 19 conference in San Antonio, Texas. With 13 resolutions on the table and not enough time to get through them all, the delegates focused on three major resolutions.

Join EIJ News as we give a brief summary of the meeting.

The meeting was gaveled to order at 1:30 p.m. With 13 resolutions on the table, leadership stated that there was no way to discuss all of them. Only six resolutions received votes, three of which were debated by delegates.

The first of these was Resolution 6, reviewing SPJ’s convention sponsorship policy. The resolution sought to appoint a joint task force of chapter leaders and unaffiliated members to study the issue of sponsorship and make recommendations to change SPJ’s sponsorship policy at 2021’s convention. Some were concerned about how policy changes would affect future costs of attending the convention.

“For those of us who have tried to raise money for Regionals (conferences), we know how difficult it is,” said one delegate. “There’s a rule in the legislative process that if you eliminate a tax, you need to know where that missing revenue stream will come from. So where will that revenue stream come from? None of my students could attend for a lot of reasons, but cost is one.”

Others were worried about the backlash SPJ has faced in the past and if not changing the policy would affect future membership.

“If prospective members are upset, they will not join. And we will just continue to—its just a cycle.”

Resolution 10 was also hotly debated, dealing with violations of the SPJ ethics code. This would make the process of condemning news organizations more formal, involving an SPJ investigation of a reported newsroom. One delegate voiced their support of the resolution’s goal of holding other new sources accountable and taking an ethical stance.

“I’m going to start by saying I’m deeply ashamed of this organization for failing to stand in solidarity with NAHJ over the Fox sponsorship. And I support this resolution because I think we need to take a stronger stance on ethical issues period.”

“It seems to me that, you know, there is disagreement among the chapters about how to handle this,” said one delegate.

“There seems to be… be no reason why individual chapters wouldn’t want to make a statement, opposing whatever it might be, and then allows a greater freedom, uh, a greater freedom of speech.”

The final debate was over changing SPJ’s name to the Society for Professional Journalism. Some were concerned about the cost that changing the name would create.

Others argued that the current title is not inclusive of all the different people present in the journalism field. By changing the name, they argued, some of the stigma surrounding the organization could be resolved

“I was on the fence about this initially, but the more I thought about it, adding “for” I think is a really, really good idea because a lot of the argument you hear about journalism in general is like it’s elitist,” said another delegate.

“It’s like you have to go through all these doors and everything. Especially for me as a person of color, I mean, I’m Mexican American.”