DUDLEY — James Singletary had a vision. He wanted an environment for his fellow African American students to allow them to grow into individuals while supporting their academic progress and providing leadership opportunities.

Mr. Singletary, who graduates from Nichols College in May, was recruited to play football at the school. Originally from Boston and then Marlboro, he valued diversity. 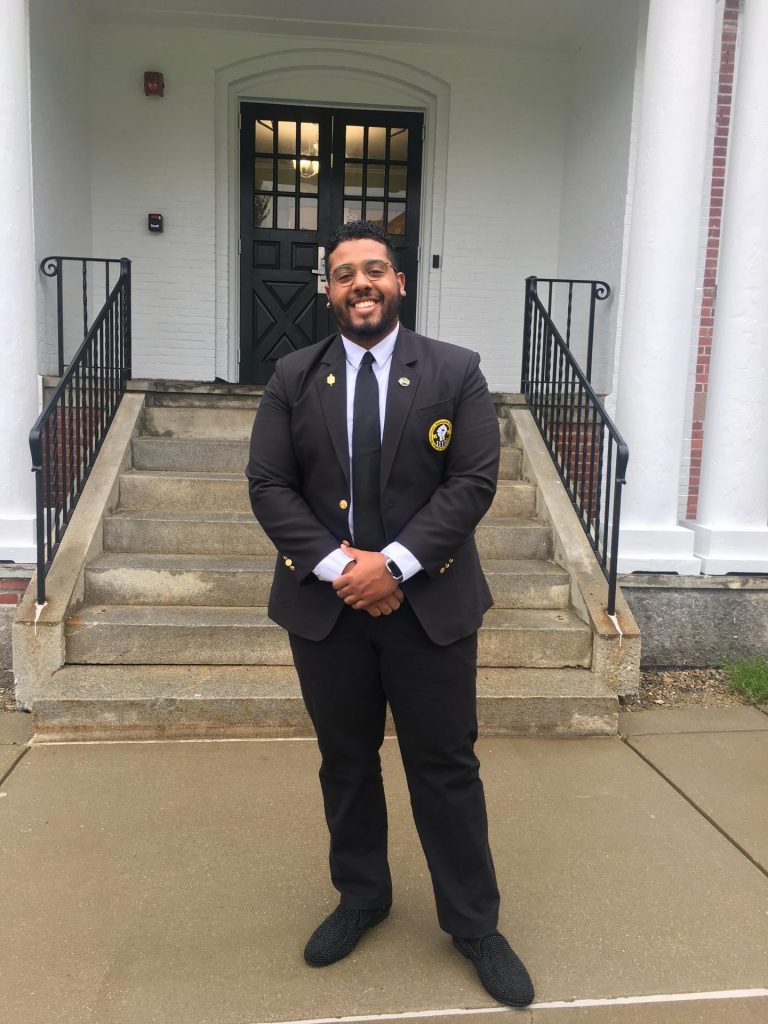 And Mr. Singletary — then a sophomore — aimed to change that situation with a question, an answer and an initiative.

“Kids that looked like me were more and more gone,” Mr. Singletary said. “I decided to ask the ‘why?’ and as I like to say, ‘Be the change that you seek.’ ”

“That grew into 10 and then 15 and then 50,” Mr. Singletary said. “I think the reason why Men of Distinction became what it was, was because we had guys who weren’t afraid to be on a boat by themselves and do something out of the ordinary.”

“Men of Distinction basically was created from the need of having an underrepresented population to support,” Mr. Singletary continued. “At Nichols, we didn’t really have anything like that.”

The group has emerged as an almost entirely African American student organization focused on promoting the ideals of respect and personal growth. The program focuses on improving the academic achievement and the retention rate of its members.

“I think that Men of Distinction is great,” said Tahkeya Blake, the associate director for the Nichols Office of Diversity and Inclusion. “I think that the social movement they’re bringing to the college is great.”

According to Mr. Singletary, Men of Distinction has achieved a 93 percent retention rate over the past year, almost four times greater than the college recorded a decade ago. Mr. Singletary points out that 92 percent of the organization’s members have increased their overall grades and semester-to-semester grades.

To become a member of Men of Distinction, students have to go through three interviews, with acceptance determined by all 50 members of the group.

Each member follows a syllabus, which can include being on time for class, taking a professor out for coffee, or creating a resume and cover letter.

Senior Ariff McLaren, a resource officer for Men of Distinction, creates a unique program for each of the participants.

“Being a psychology major and wanting to become a counselor in the long run, I figured this would be a good thing to have under my belt — to know that I’m naturally just able to help guide their way throughout their time at college, given that we were all in the same shoes at one point,” Mr. McLaren said.

The organization also has started a mentor program that connects students with successful people in the work world. The mentors run workshops and talk with individual MOD members.

“A lot of our mentors come from some sort of minority background,” Mr. Singletary said. “These are men and women who have so many different careers, so many different areas of expertise. They add their own spark.”

Mentor Jeff Thomas graduated from Nichols in 2012. Mr. Thomas runs an accounting or investment workshop each month for Men of Distinction. He also allows any member to call him at any point of the day to discuss what he should do within his major, according to Singletary.

Another Men of Distinction requirement is visible to the entire Nichols campus every Monday: wearing ties and jackets.

All MOD members have to become involved with some sort of volunteering. Each semester the group presents a community service event to showcase opportunities.

Those include financial- or career-oriented initiatives, including recently visiting the Staples headquarters in Framingham.

Singletary has begun reaching out to other New England colleges. He said that he hopes to see Men of Distinction become a national endeavor.

“We’ve had great support from the board of trustees of Nichols and the board of advisors as well,” Mr. Singletary said. “We’ve been also able to expand and reach out to other institutions.”

So far that effort has included the College of the Holy Cross and Worcester State University, along with Northeastern University, Brandeis University, Harvard and Yale.

“We want to see something like this be on every institutional level,” Mr. Singletary said. “This is the kind of step forward that we need with students to change the future.”

Mr. Singletary’s hope is that any college or university that wants to start a group would receive packets, phone numbers, and information on key aspects of his organization.

“We’re starting on a small scale, but we’ll get there. This is just insane. A year ago, it was just a few of us sitting in a room,” Mr. Singletary said. “I think we’re ready to expand and change the lives of others.”