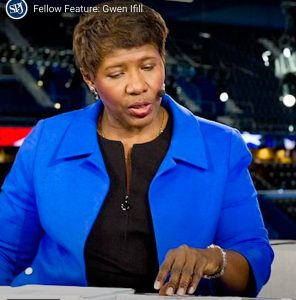 To Robert Ifill, his younger sister was more than just a journalist breaking barriers and making history as the first African-American woman to host a national political talk show. She was, as he considered, the “star” of the family.

“When we were younger, she was always referred to as `Robert’s little sister,’” Ifill recalled. “But when she was really excited talking about her job as a journalist, I would tell her that she was now the star of the family.”

Gwen Ifill’s career as a professional journalist started while she was completing her undergraduate studies at Simmons University, where she interned at the Boston Herald-American. She was hired by this newspaper after earning her bachelor’s degree in communications.

“At the Boston Herald-American, she started out as a ghostwriter for an advice column called `Tell it to Joe,’” Ifill said. “She moved on to cover food and features.”

After four years at Boston, Ifill moved to Baltimore, where she started a job at The Baltimore Evening Sun.

“Gwen’s job at the Baltimore Evening Sun was where she was introduced to political reporting,” Ifill said. “She first covered city hall and then was able to be part of a staff that covered the Maryland legislature during her session in Minneapolis.”

From there, Ifill went to work at the Washington Post in 1984, where she covered Prince George’s County politics. She quickly gravitated to covering national political races.

“The very first race she covered was the presidential election in 1988,” Robert Ifill said. “She covered Jesse Jackson and Michael Dukakis.”

At the Post, she became a senior political reporter, but left after being told that she did not have enough experience to cover Capitol Hill.

After a brief period at the Times, Gwen Ifill became a television reporter for NBC, covering the White House and Congress. As she was living in Washington D.C., at the time, she was an occasional guest for journalism talk shows.

“One of the talk-shows she was invited to was [a PBS show] called `Washington Week,’ but at the time was known as `Washington Week in Review,’” Ifill said. “She became a very popular correspondent at the roundtable shows, which typically had a moderator and four reporters to cover politics.”

When Paul Duke, the moderator for the “Washington Week in Review,” retired and his successor left, Gwen Ifill was asked to step into their roles. She did under the condition that she would have two jobs at PBS: one as a moderator of “Washington Week” and another as a senior correspondent for the show “The Newshour with Jim Lehrer.”

Gwen Ifill held that position for the remaining two years of her life.

“In the meantime, she did a number of things outside of those jobs, including hosting vice presidential debates in 2004 and 2008, conducting town hall meetings, particularly around issues of race, and authored one book focusing on the awakening of young black politicians during the era of Obama,” Ifill said.

On November 14, 2016, she passed away after a long battle with cancer.

“She thought of herself not just simply as a trailblazer and pioneer but also as a door-opener and a mapmaker,” Ifill said. “What I mean by that was that she was always conscious of people coming up behind her and she wanted their path to success to be easier than hers had been.”

Robert Ifill states that if Gwen Ifill were alive today, she would encourage young and aspiring journalists to get their voices heard.

“She learned how to get her voice heard when she was in a room full of white males the hard way,” Ifill said. “She kept to her values, she worked hard, and she came prepared.”

Previous story
Journalists adjust their reporting style through the pandemic
Next story
#SPJ2020: The Importance of Inclusive Newsroom and Inclusive Coverage
The SPJ News