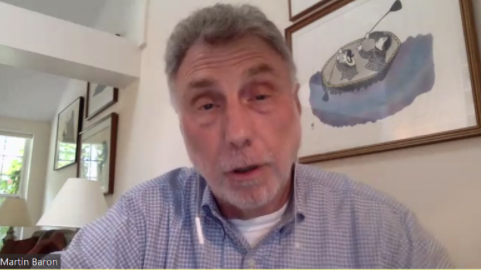 Liev Schrieber nailed his depiction of Marty Baron in Spotlight (2015): an exterior gruffness that brings out his cantankerous nature and high-standard expectations.

But Schrieber missed one thing.

“What it didn’t capture is that there’s an awful lot of humanity and loyalty–and I would never say softness because he would kill me,” said Tracy Grant, managing editor for staff development and standards.

Baron showed that distinct humanity in his speech Sunday at the SPJ Conference as a Featured Fellow, especially by mentioning he did not expect this honor. Baron shared about Spotlight, working during COVID-19, and the reputation The Post has.

“The people who came to The Post — they came because of its established reputation as an institution of high quality and integrity,” Baron said. “Those principles, standards, and practices are applied every day in the work that we do.”

Baron denied to comment during the session on Bob Woodward’s upcoming book “Rage,” as he is a separate journalist and Woodward makes decision’s himself.

“He is an extraordinarily loyal person,” Grant said. “He understands the sacrifices that people make to do this work.”

Baron, the editor-in-chief of the Washington Post,  joined the D.C. news team December 31, 2012. Before, he was an editor at the Boston Globe and held top editing positions at the New York Times, Los Angeles Times, and Miami Herald. Newsrooms under Baron’s leadership have won 17 Pulitzer Prizes.

“He is definitionally a leader,” Grant said. “There’s nothing common about Marty. He is the best copy editor in the newsroom. There is nothing that is not worthy of his attention.”

2013 was a transformative year for The Post, according to Grant. Ten months after Baron joined the team, Jeff Bezos bought the paper. The two together created a perfect storm to bring The Post to the success it is now.

“Marty’s tenure has been nothing short of remarkable in the ways that he has energized people to be ambitious and creative,” Grant said, “and to be part of hiring the people who will win Pulitzer Prizes and hold people accountable and tell stories that must be told for the next generation is just a fabulous thing to be tasked with.”

The Post now has over two million digital subscribers, the largest readership the newspaper ever has had. The newsroom has grown as well, due to The Post becoming profitable again. Over 300 people have joined the team, notably internationally and for technological coverage.

“Under Marty, The Post grew exponentially,” said Emilio Garcia-Ruiz, the managing editor overseeing digital strategy. “He knew to really be a digital newsroom you had to have coverage around the clock.”

Garcia-Ruiz will be leaving Baron’s team soon, though. He was recently announced as the new editor-in-chief of the San Francisco Chronicle, starting September 21.

“Marty has been a terrific role model as to what it means to be a great editor,” Garcia-Ruiz said. “If I can take 20 percent of what he does, I’ll be in good shape. Marty is a prototype for what it is to be an editor.”

Baron has overseen investigations at The Post like that around secret surveillance by the National Security Agency, Donald Trump’s charitable claims in 2016, and allegations of sexual misconduct by Roy Moore. He ensured each publication was put out at a high quality, according to Leen.

“That’s one of the main reasons people turn to The Washington, in addition to our political coverage” said Leen. “It gets a lot of traffic and a lot of engagement from readers, and we get a lot of feedback that they really appreciate the reporting within the public interest.”

Beyond investigations, Baron has placed a higher standard to the articles The Post puts out.

“He’s very hands on, and he has good news judgement,” Leen said. “He knows how to fix a news story. I just appreciate what he’s done for the things that I’ve worked on.”

“One of his many talents is that he can think clearly into the future,” said Cameron Barr, managing editor of news and feature. “He is always trying to position us for how events could unfold. He’s also always asking us to make sure we’re holding powerful institutes into account.”

Baron asks journalists to recall what they know about individuals or institutions, let that be Donald Trump and the White House or someone for a local piece and a business organization. He asks them to measure previous statements to current conduct.

“We place a great deal of emphasis on accountability,” Barr said. “Marty has been a true leader in keeping us focused on those kinds of targets…He serves as an important steady reminder that our job is to hold those kinds of institutions to account on behalf of readers and the public.”

And Baron doesn’t mean that subtly.

“This is what great journalism organizations do. They tell stories that people need, the viewers want, but also serve the public interest,” Barr said. “For most reports and editors at The Post, Marty’s reputation has been an inspiration to them. It gives people a sense of confidence…You know that the boss has your back.”

In fact, Baron set a precedent on taking care of yourself during the pandemic, according to Grant. Instead of “paying lip service,” Baron took a week off, giving permission for everyone else to do the same.

Like the scene in “Spotlight,” people wait for Baron to leave the newsroom. That’s the kind of figure and prominence he holds. Baron provides The Post ambition and vision that wasn’t there before, Grant said.

“The greatest thing about Marty is that you always know exactly where you stand with him,” Grant said. “That transparency has allowed us to focus on the journalism in a way that’s really gratifying. We know what the standard is. We know where the bar is set. It’s remarkable to watch a room be energized to be worthy of Marty’s standards. He brings out the best in people.”