Hall said he is hopeful for the future of SPJ, especially in the hands of 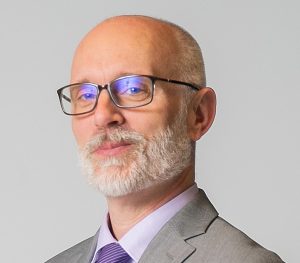 the 105th president-elect Rebecca Aguilar. He plans to continue his involvement with journalism advocacy within the organization.

After “an ultimately rewarding year,” Hall is thankful for the work journalists continue to do during stressful times.

Working over 60 hours every week, raising two teenage daughters, and supporting his wife while being president-elect during the pandemic was difficult, he said, but it “was the privilege of a lifetime.” If nothing else, Hall said he is looking forward to sleeping in on Sunday.

“We made a lot of progress in a year when we couldn’t even see each other in person,” he said. “There’s a lot of work to do in the business and in journalism groups. We need to keep our shoulders to the wheel.”

Knowing it would be a difficult year with the pandemic, Hall wanted to focus on making SPJ more accessible and connected, while also advocating for the watchdog role of the organization.

With attacks on press freedoms all around the world, journalists are assaulted by police officers, challenged by a distrusting public and struggle to get information from governments, according to Hall.

“The advocacy work of SPJ and the high ethical standards we fight for are all things that the new board is going to have to focus on,” he said.

By developing new reachout initiatives and expanding panel discussions, Hall said the organization prioritized diversity and inclusion over the past year and opened up tough conversations when designing their new plans to encourage newsrooms to share their staff demographics.

“It’s important not because diversity is about just checking boxes, but because we need to reflect our communities,” he said. “And that’s one way we can hold our newsrooms accountable.”

With the pandemic continuing to alter plans, the outgoing president stressed the importance of being adaptable and communicative in uncertain times.

To Hall, this meant holding more public meetings, reaching out to every chapter, making it easier for campus chapters to initiate, and being more transparent as a board.

“When it came to the decision for the conference, we continued to follow that philosophy,” he said. “Even though we were separated physically, we could still be connected during the pandemic.”