When Rebecca Aguilar, president-elect of the national Society of Professional Journalists, is sworn in at the group’s virtual conference later this week, she’ll be making history.
Aguilar, 63, with more than 104 predecessors, will become the organization’s first-ever Latina and woman of color president. 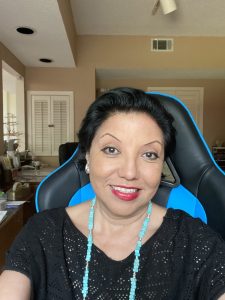 The multi-Emmy award-winning journalist who pulled in 62.3% of the vote during the election to nab the top job, said she’s ready to take the reins of the organization and lead it into a new era.
And with several decades of broadcast journalism experience under her belt — she’s covered everything from the Los Angeles riots to Super Bowls, the murder of iconic Tex-Mex singer Selena Quintanilla, and a string of natural disasters, among many other historical events —
those who casted a ballot for her, are betting on Aguilar to do just that.
Her efforts, Aguilar said, will be fueled by her deep appreciation and love for the industry. Her focus? Ensuring all SPJ members know its “an organization that is there for them. To defend them. To protect them.”
This means an added emphasis on diversity within the group, she said.

“We have to change things inside and outside… and that means bringing [in] diverse voices,” said Aguilar, who as Chair of SPJ’s Diversity Committee is no stranger to diversity, equity and inclusion initiatives.

She joked that she’s so familiar with the efforts that “diversity is my middle name.”
As a “proud Mexican-American woman,” raised by parents who were undocumented, Aguilar said “it’s in my blood to defend and protect and unite.” It’s because of her family and because of her bicultural and bilingual background that she decided to enter the field of reporting in the first place, she said.
Inclusion, Aguilar said, is a focal point of her plan of action to improve SPJ. She described the progress of the organization’s internal demographics thus far as commendable.
This year, six out of nine board members are people of color. Whereas, said Aguilar, “a few years ago, the board was almost entirely white.” (In 2016, every staff member present at a Board of Directors meeting was white-presenting.)
Aguilar maintains that her “entire strategy” for presidency is based on the happiness of SPJ’s members, ensuring that everyone is “getting their money’s worth.” And credited her longtime love and passion for journalism as what makes her so excited for this new role.
Aguilar is set to replace Matthew T. Hall as SPJ president.