SPJ Board of Directors reflect on a challenging year

The Society of Professional Journalists Board of Directors met Thursday morning at the national conference to reflect on a challenging year, review reports, and say goodbye to retiring members.

The one-hour meeting was outgoing president Matthew Hall’s last. In a virtual format, the board covered the SPJ President, Executive Director, Treasurer, and Committee and Community reports. 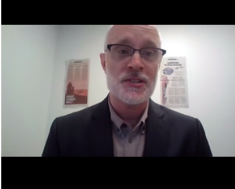 A screenshot of SPJ President Matt Hall from the Board of Directors meeting.

“I hope no other board has to meet twelve times,” Hall said reflecting on his tenure as SPJ President.

In his President’s Report, Hall discussed the challenges this year’s board faced during COVID-19. Some examples Hall shared were never meeting in person, meeting twelve times, and the emotions of navigating the year. Normally, the board would gather in person about eight to ten times.

Hall also thanked SPJ members, committees, board members, and “all the journalists all over the world,” for their support this year.

In the Public Comment section, Hazel Becker, a panelist at this year’s conference, said it was a tough week for the freelance community but was proud to be a part of it. Andrew Seaman, a president-elect candidate said Hall did great handling all the changes this year.

Executive Director, John Shertzer discussed the conference going virtual and mentioned it was good timing with COVID-19 and Hurricane Ida in New Orleans. He also expressed regret about not being able to support the businesses of the city.

“We agonized over whether and how to proceed with our annual convention in New Orleans in the pandemic – discussing it in three public meetings and two membership surveys – then made the right call at the right time to move online and avoid a six-figure hotel cancellation penalty,” Hall wrote in his President’s report.

The Finance Committee also discussed the finances of New Orleans, adding that SPJ is still trying to recoup $7,500 from the riverboat cancellation. Director-at-large Lauren Bartlett asked how SPJ can protect itself from conference financial risks in the future.

Shertzer said the organization has considered buying conference insurance, which could be costly, and utilizing a lawyer. At the same time, Shertzer said SPJ has a more positive financial picture than last year. The organization saved on traveling expenses during COVID-19.

“For now, we are saving on those things and that’s helping the bottom line,” Shertzer said.

In the Committee and Community part of the meeting, each committee chair spoke about their reports.

Rebecca Aguilar, president-elect, and diversity chair said to follow this year’s six 2021 SPJ Diversity Leadership Program Fellows. The program was cancelled in 2020 due to the pandemic, Aguilar wrote in the Diversity Committee report. 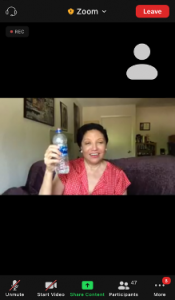 A screenshot of SPJ President-elect Rebecca Aguilar from the Board of Directors meeting.

Niles said she recommends future committee chairs increase communication. Past efforts to integrate the freelancers into SPJ have paid off, the committee’s report said.

“That said, it remains a challenge to communicate with other leaders from the organization, especially chapter leaders, in order to coordinate cross-promotions and share best practices,” Niles wrote in the Freelance Community report.

The last item on the agenda was an “Appreciation for Retiring Board Members” where Hall expressed gratitude to departing board chairs.

Aguilar thanked Hall with a surprise gift wrapped in a Christmas box. Inside was a plaque that said, “Teamwork makes the dream work,” an Amazon gift card, and a thank you card.

“A toast to you, Matt, for being a class act, for leading us through one hell of a year,” Aguilar said.

The board of directors and meeting attendees then held up their mugs of coffee and water bottles. They took a sip in honor of Hall’s work as SPJ president.

Previous story
USC Inclusion Initiatives Inspire Empowerment in Student Newsrooms
Next story
‘We need to be honest about how these things affect us’: Learning why–and how–journalists invest in their mental health
The SPJ News