How to Strengthen an Interview When Talking to Strangers

Interviewing sources is a vital part of being a journalist, but it is often difficult for reporters to get a source to open up and feel comfortable sharing their story.

Dean Nelson, a journalist of 40 years and an author of 15 books, stresses the importance of “talking to strangers” and being a strong, compassionate interviewer.

“We need the human voice in our stories,” he said. “We need their shared humanity. So regardless of whether our sources 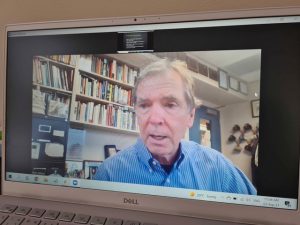 “They are the most guarded and the most practiced,” he said. “What you need are eyewitnesses, or stakeholders. They are the ones who can provide the details and they are going to be the most important sources. “

People are reluctant to talk to journalists, he said, whether it be for a lack of time, a bad experience with reporters, or viewing reporters as the enemy.

Overcoming reluctance is one of the main challenges journalists face when interviewing, but Nelson offers, “people generally want to help, and especially if you are a student,” Nelson said. “Your story matters. We want people to know that we want their voice in this.”

Nelson encourages journalists to be themselves during the interviewing process rather than imitating other reporters, saying that authenticity appeals more to people being interviewed.

Beyond being themselves, journalists should show up to interviews as prepared as possible, according to Nelson, with exceptions for breaking news stories.

“Preparation really is everything,” Nelson said. “You should know most of the answers (to) the questions you are going to ask. It shows the interviewee that you’ve done your homework, but it also minimizes lying and spin.”

Nelson recommends strategically planning questions or topics ahead of time, using them to guide their interviews. Interviews should have a beginning, middle and end, starting and ending with easier questions, according to Nelson.

“Not everyone can operate without a net,” he said. “So, I think you should have an idea of where the interview is going to go.”

Asking the tough questions is expected of the audience and source, but it does not have to be an interrogation, Nelson said, encouraging journalists to treat an interview like a conversation.

Nelson advises journalists to strengthen their interviews by truly listening to and interacting with the source, as well as being intentional with silence.

“Silence is part of the grammar of an interview,” he said. “You can be quiet for a really long time. Let your source fill in the silence. There are really clever ways to use it.”

His final word of advice to journalists is to take the reins of the interview to avoid being stepped over or “have the tables turned.”

“Someone will be in control of the interview,” Nelson said. “It has to be you.”