Objectivity: The Hot Topic of Conversation Across Newsrooms Today

Following protests of George Floyd’s killing last year reporters began to question why a traditional news standard was still applied to coverage and, more importantly, how to move past outdated notions in 21st century journalism.

In an SPJ 2021 Journalism Conference super session Sept. 2, panelists discussed what it means for newsrooms to redefine objectivity to fit the standards of today’s changing world.

Tom Rosenstiel, Executive Director of the American Press Institute, said that there is no concept that is more central to journalism and more confusing than objectivity. When the term first migrated into journalism in the 1920s, its original intention was more of what we call transparency.

“Show me how you did the work, so that I can judge for myself whether you did it well. It was not meant to be the denial by unconscious bias or the denial of the subjective,” Rosenstiel said.

However, the original definition has been lost along the way and now it is being taught the way it is understood.

“I think most journalists say, ‘No, I have a view I start with, I have a bias towards facts, empiricism, verification, and I’m going to apply these tools and these things I believe in to start from my own view and then broaden out to a wider view using tools, using methods that I can show an audience, how I did the work so they can judge,’ ” Rosenstiel said.

“One of the concerns I have is that what we are taught in journalism school tends to be, perhaps, more black and white than nuanced. When you get out into the field….if you’re a local reporter, of course, you do have a view from somewhere you’re on the ground doing reporting and so I do agree with Tom on that point that in some ways this view from nowhere that has been cast upon the definition of objective journalism,” Kalita said.

In place of objectivity, Kalita likes to use three words to define her journalism: perspective, service and relevance.

“I think one of the questions that I have working in community media now is how useful are we, and how invested, are we in our communities if we’re trying to impose a distance upon how we perform our jobs in the craft,” Kalita said.

Maya King, a national politics reporter at Politico, said that when she was studying at Howard University, she found that the lesson plan she was given was often different from other college journalism programs.

“In learning about objectivity and how to apply that as reporters that was of course trying to get the full story and trying to make sure that we were reporting without including our own personal biases, but that was also in the context of largely reporting on Black communities and Black issues and so that was taking away our biases but also societal biases in many ways,” King said.

Rod Hicks, Director of Ethics and Diversity at the Society of Professional Journalists, said that back when he was a reporter in Alabama, he went to a small town council meeting and there was a discussion about cutting the police budget.

“There was a white police officer there who was very adamant that that was the wrong thing to do. And he gave an example of why it was bad. He’s like, ‘We need more police officers and not fewer,’ and he talked about how he was on a call to something by himself and then there were two black males,” Hicks said.

“As he described it, and he said, ‘You think about this, I’m out here by myself with two black males. Well, roughly at that 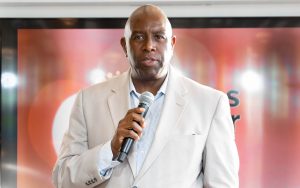 time, when he said black male, he wasn’t really saying a person who was male and African American. He was saying a dangerous person.”

Hicks said that ‘Black male’ is a term that is used in news coverage all the time when reporters are reading police reports, and he says that if we were to say that it is an objective statement to call a person a Black male, then we are not accepting the reality of what the term means and how it is used.

“And so, this talk about our view from nowhere. Well, it came from mostly white men who had newsrooms and who were reporters, and that, and that is what we’re calling objective…I think that objectivity is the closest that you can get to the truth,” Hick said.

“Our SPJ code of ethics is just filled with ways that you to try to make your reporting and your coverage, fair and accurate, and balanced, and true.. the very first item of the SPJ is to seek the truth as reported and that’s really as close as you can get to objectivity and that’s what we should strive for.”