Phoning It In with Mike Castellucci

Grab your phone and a tripod, then hit the road. Illustrious Mike Castellucci, multi-Emmy award winner and renowned cellphone video journalist, showed a group of journalists how to use their iPhone to tell the best stories that can compete on the same playing field as large news cameras.

“I like to have fun with those transitions in between stories,” Castellucci said. “The stories I do, I like to think they’re meaningful and inspire folks and that’s the true storytelling. I just like to have some fun since I’m doing it with my phone.”

Castellucci said one of the most important things involved in a broadcast news story is the audio. He said he uses Rode 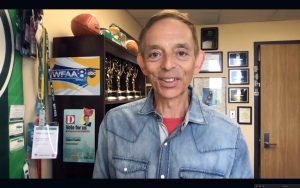 “I’ve seen stories that have beautiful pictures and the audio is horrible and the story is mediocre,” Castellucci said. “I’ve seen stories with mediocre visuals but the audio is spectacular and it makes it that much better … and the goal is all about creating an engaging, emotional story that we can all relate to.”

Castellucci said one big problem journalists assume will be an issue is storage space. He advises journalists working on devices with small storage space to only record the interviewees answer to each question and never record more than 2-3 minutes at a time. He said he also moves the camera in between questions to get multiple different angles of the interviewee for the story to develop in a natural flow of movement.

“By asking a question then stopping and moving, it goes back to what I learned from some of the best journalists around — ‘shoot and move’,” Castellucci said.

Castellucci’s experience in abnormal videography for television news began about eight years ago when he shot a 30-minute show with only a flip camera. Castellucci said it was a challenge but a fun one that won him three Emmy’s.

A year after the 30-minute show, Castellucci’s boss at Dallas’ WFAA station told him the station was low on photojournalists for the day but they needed a particular story so the boss asked him to shoot the story entirely from his cellphone. 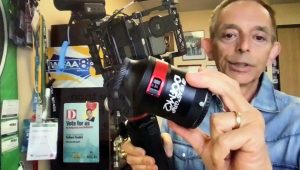 After the show was put on the newscast, Castellucci became known in the studio and in homes in the Dallas area as the guy “phoning it in”. So he started his own show called “Phoning It In” dedicated to news stories shot only with his iPhone.

Castellucci said iPhones are evolving quickly and are already producing content in high quality so it’s time more journalists in the U.S. adhere to the technology shift. On Thursday, a list of the top 40 mobile journalists around the world that people should follow was released. Castellucci said he was the only journalist on the list from the U.S.A.

“This tells me we’ve been a little slow to embrace technology,” Castellucci said. “Everything that I need to shoot with an iPhone I can find on Amazon except how to tell a story.”

He emphasized that journalists simply have to want to be open to adopting new technology in the workplace because the skill of telling stories is already with them, the equipment is the only thing changing.

Previous story
Objectivity: The Hot Topic of Conversation Across Newsrooms Today
Next story
“We’ve got to do the work”: Newsroom leaders aim to amplify and diversify voices in editorial pages
The SPJ News