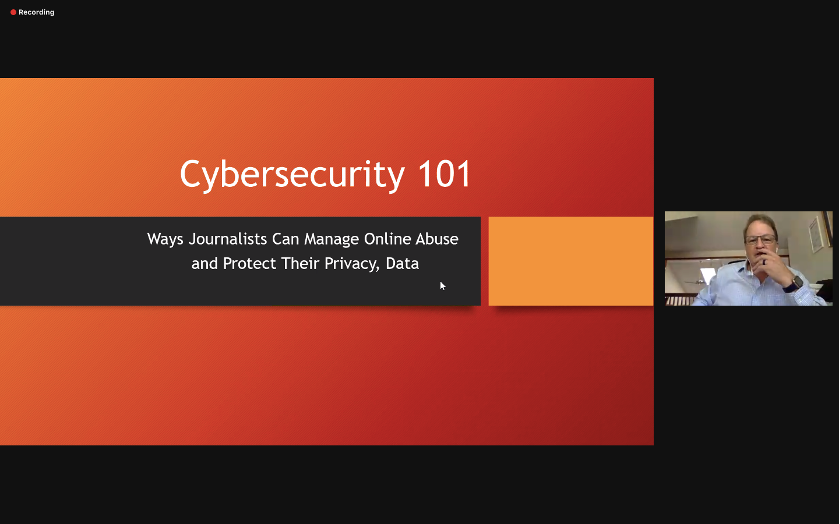 Hey journalists, want to protect yourself from online trolls? Follow these 3 tips.

The Society of Professional Journalists Ethics Committee was once trolled at an SPJ conference, Kevin Smith, executive director of the Kiplinger Program at Ohio University, said while speaking at a “Cybersecurity 101” session part of this year’s virtual conference.

It happened five years ago when he was the ethics chair, he said. The committee was tagged in a post that was sent to #Gamergate, a digital group Time reported was known for targeting corruption in gaming journalism.

Within an hour of the post, Smith said he had 300 people attacking him online.

Online trolling has only gotten more prolific since then, but Smith said there are steps journalists can take to protect themselves online.

Here are 3 of Smith’s tips:

1. Identify your abuser, Keep a record

During the pandemic, Smith said he noticed an uptick in online trolls attacking journalists.

“They’re using this opportunity as a way to advance whatever it is they hate or who they hate,” he said.

If you’re being trolled, Smith said you should first identify who is [the troll], what’s their relationship to you, and what their methods of harassment are. Trolls can be individuals, an institution, or groups that sometimes work together.

The first step to identifying a troll, is to do what any good journalist would, Smith said — “do your research.” Look at accounts, location identifiers, study the photos, and see if it’s a bot, he said.

“The obvious ones are where they appropriate someone else’s image, a celebrity, a former politician, President Ulysses Grant, and then they have a quirky name,” Smith said.

Smith advises journalists to keep a record of their abuser’s behavior — no matter their tactics. He suggests documenting their names, the threat, taking screenshots, and even keeping a spreadsheet. 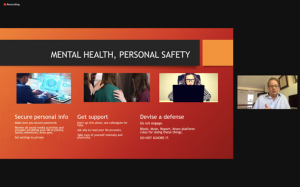 One way journalists protect themselves from trolls is to secure their personal information online, said Kevin Smith, executive director of  The Kiplinger Project at Ohio University. (Screengrab)

A way to prevent online harassment is to review your public information online. Smith said to look yourself up online, clean up your social media, scrub photos, and set accounts to private.

“I am hesitant to recommend this because it almost goes against our journalistic impulses because we spend a lot of time-fighting for public records,” Smith said.

The support of your newsroom is crucial in online harassment situations, Smith said. This means using editors and colleagues as support systems and buffers. He said they do not just go after you, they will go after your family, friends, and coworkers.

“There needs to be a system that comes from the top down where the editors are involved,” Smith said.

Even with support, you should not engage with a troll directly, Smith said, because nothing makes them happier. Instead, Smith recommends reporting, blocking, and muting them online. Then, it is important to utilize the platform’s rules and share your evidence of the troller’s conduct.

“They have nothing better to do than chasing you down, finding information about you and using it against you,” Smith said.

And remember, Smith said: “Trolls do not know boundaries, otherwise they would not be trolls.”