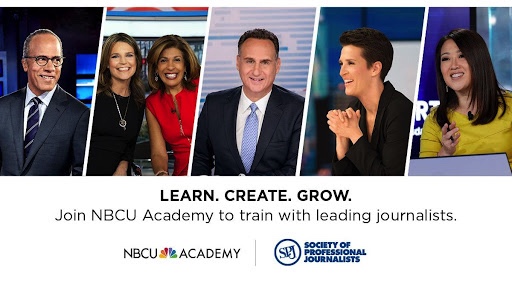 “Building a Pipeline from the Classroom to the Newsroom”: What is NBCU Academy and How Can I Participate?

At the Society of Professional Journalists 2021 Conference, the NBCU Academy hosted a workshop: “Visual Storytelling During Breaking News.” A small group of students, who had applied in order to participate, worked in breakout rooms with NBC journalists to better understand how to juggle an influx of information during a breaking news event, while keeping their reporting both accurate and visually intriguing.

The NBCU Academy is a journalism training and development program leading virtual and in-person educational workshops across the United States.

Yvette Miley, NBC News Group SVP of Diversity, Equity, and Inclusion, emphasizes that the NBCU Academy aims to use these workshops to help create opportunities for journalists from all cultural and economic backgrounds. “NBCU Academy is building a pipeline from the classroom to the newsroom,” said Miley.

“NBCU Academy is a commitment from us to improve diversity, equity, and inclusion in the journalism field and offer free journalism education to anybody in the field,” added Benjamin Pu, NBC News Group Diversity, Equity, and Inclusion Producer.

In the breakout session, select participants were broken up into miniature “newsrooms” led by NBC journalists. The participants were led through a simulation, where they were guided through how a real-world newsroom would report on a breaking news event. Participants were walked through three separate chronological “developments,” the first of which introduced the earliest updates on the story as journalists would have received them in 2018, and the latter two of which introduced new elements and complications. Participants updated their written reports as they received new, “breaking” information.

The story in question was a real 2018 controversy in which a Chipotle manager was caught on video telling a group of Black men that they would not be served because they “never have money when you come in here.” After the video went viral on Twitter, Chipotle fired the manager, and then rehired her. The rehiring took place after new evidence arose convincing Chipotle leadership that the manager had reason to believe the men were the same group that had sought to “dine and dash” from her restaurant earlier that week.

NBCU Academy workshop participants were encouraged to set aside their individual opinions about Chipotle’s conclusions and instead lay out the events as objectively as possible in their articles, while emphasizing the story’s most fundamental elements and using tweets, videos, links, and visual elements to supplement their reports.

Throughout the workshop, the NBC mentors answered questions on how to handle the moral and ethical complexities of reporting on a complicated story with only limited information to draw from. Students were advised on how to practice effective fact-checking, source-gathering, and developing an understanding of what information is most important before publishing a story.

After updating their articles twice over the course of learning about the two additional developments, participants read out a sample of their report to their NBC mentors, who provided them with feedback on the journalistic choices and points of emphasis they had made in reporting on the story.

“I was so excited when I got into the NBCU Academy,” said Bennett. “If you are interested in learning from reporters who really understand the craft, this is a great use of your time. Going through the specific scenario and deconstructing the different developments was extremely helpful to me as an aspiring reporter. I met amazing and accomplished journalists while also getting a better understanding of what it means to present a factual and timely story.”

To learn more about NBCU Academy, listen to SPJ News conversation with Benjamin Pu below. Pu speaks at length about the organization’s mission, and what NBC considers when selecting applicants for these selective workshops.

Previous story
4 top political cartoonists. 1 virtual room. Here’s what they had to say about virtual satire in the age of social media.
The SPJ News