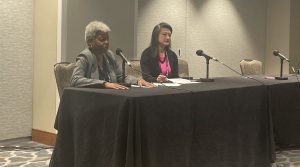 The president of the League of Women Voters claims the news media were biased in how they reported on the 2021 attack on the U.S Capitol.

Deborah Turner and millions of other Americans were glued to their televisions and phones on January 6 relying on journalists to report and explain what exactly was happening.

However, according to Turner, there were mistakes made in how the story was covered.

“The first thing I remember seeing was the picture of the policeman whose head was squished in the door. That still lives in my mind even right now,” she said.

“Then [I saw] the people climbing up the walls of the White House. I was like, ‘Is this really happening? In America? I was totally flummoxed. I never heard the word ‘insurrection’ [that day].”

“I can’t say I remember exactly. It was quite a while. It wasn’t used very frequently. It still isn’t,” said Turner.

According to a Washington Post article, CNN used a six-word headline, “INSURRECTION IN WASHINGTON FOLLOWING TRUMP ENCOURAGEMENT” the afternoon of the attack.

The fact that a self-described “news junkie” like Turner missed the usage of such an important word is notable. In fact, Dr. Sha shared a similar experience.

“I think it was only months later where a public official used ‘the I-word’ and I was like, ‘They said it,” said Dr. Sha.

“I was so shocked by that person’s courage to use that word in a public setting.”

Turner also noted that news media sources could have reported the insurrection in a less political manner. The clear attack on democracy should have been the main focus instead of involving political parties in the initial reporting.

“I think sometimes the media has difficulty taking themselves out of that partisan view and talking about the issue. The issue with the insurrection was not whether you were a Republican or Democrat, it was that we had Americans attacking our nation and trying to take down our democracy, ” said Turner.

“It didn’t matter what group they were in,” she said. “They were insurrectionists. There wasn’t a lot about the issue of stopping the peaceful transfer of power, which should have been the critical thing. We’ve never had anything like this happen in our country before, and those [topics] should have been on the top to me.”