How to Avoid Jerks on Twitter as a Journalist 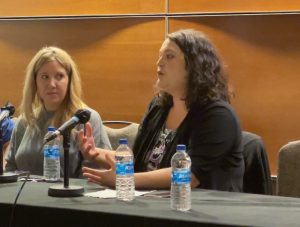 1.1 million “abusive or problematic” tweets were sent to women in 2017.

Two female journalists refer to Twitter as a “hotbed of harassment.”

After years of being journalists and being interactive with their followers through their social media accounts they insinuated that using the app is a skill that took them effort and time to master. Sarah Wire, staff writer from the Los Angeles Times and Amanda Vinicky, Chicago Tonight Correspondent talked about the negative and positive aspects of using Twitter as journalists.

Twitter can be used as a platform for your audiences to build trust in your moral character and storytelling. It can also be an information gathering tool where you can reach out to sources directly over DM. Catastrophic events and breaking news can be shown or told in real time by live streaming or live tweeting. Misinformation can be corrected. There is an opportunity to have open discussions and answer earnest/genuine questions that your audiences may have.

What risks come with using Twitter as a journalist?

“There is a filter removed where people feel more free to be bigger jerks,” said Vinicky.

You have to interact with or witness harmful twitter users who criticize and/or harass you. There is also a chance that your account can be hacked to get your personal information or spread misinformation through your account.

As a journalist you should have two factor authentication on ALL of your social media accounts. This is an extra layer of protection used to ensure the security of your online accounts beyond  just your username and password. Also if you do get hacked, tell your boss and see if they can help you. Protect your account’s legitimacy by always fact checking everything you retweet or tweet and if it’s incorrect…correct it.

“Twitter is not paying the bills, it is just a tool for your real job,” said Vinicky.

“LA times pays my salary not Twitter. Using Twitter, I can make real life friends and meet real life sources but it is also not real life,” said Wire.

Some journalists put too much emphasis on building a personal brand. Twitter is useful for self-promotion but that is not all you should be doing. Don’t forget, you are a journalist! You should also be filtering your notifications because the majority of the feedback you get on Twitter is just not useful. It is important to limit engagement with negative/hurtful comments and never entertain internet trolls. Giving these trolls attention, elevates their voices. Lastly, never buy your credibility on Twitter. For example, some journalists were caught buying followers on the app to pump up their following amount. Basing the legitimacy as a journalist on your social media following is a no no! You should be focusing on aspects like your work ethic, accuracy and integrity.

With Elon Musk’s new ownership over Twitter, will the safety for journalists on the app change?

“I think we are still figuring out what Elon Musk’s purchasing of Twitter means. I think that we are going to see a somewhat tumultuous time. Predicting what it will mean for Twitter in general and journalism at large, I think it’s too early” said Vinicky.

What was the take away from this entire session?

“Twitter is not the end all be all of journalism or life period so I think it’s important for journalists to realize that Twitter is a tool and knowing how to use it as such,” said Vinicky.

Previous story
Deserting the Printed Past: Why College Publications Need to Adapt
Next story
Reporter speaks on combating journalistic repression
The SPJ News